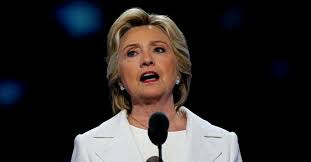 While I never asked to be part of "Onward Together," I regularly receive emails from Hillary Clinton on behalf of that organization. These emails always ask for money. The latest email solicitation I have received is shown below: 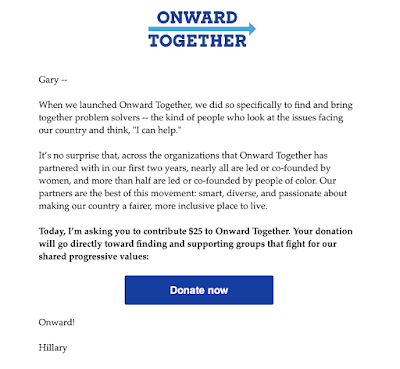 As someone who does make quite a few political and other contributions, I expect to be solicited, and I really don't mind being asked. The way I am asked, though, can sometimes rankle, and I tend to react quite negatively to appeals based on false claims of familiarity.

As I pointed out in an earlier blog posting, I did not much like an approach by Kirsten Gillibrand, Hillary Clinton's successor in the United States Senate, and now a candidate for president. Gillibrand, with no basis for saying so, claimed that I was a member of her "team." That was not actually true, and I resent communications that do employ the tactics of false familiarity to try to manipulate me into making a contribution or taking some political action. Gillibrand could have said something like: "Gary, I'd like you to be on my team, because..... [then giving me a good reason]." That kind of an appeal might work, if I thought the "good reason" was compelling.

Not surprisingly, Hillary Clinton herself employs the tactics of false familiarity in her political solicitations. She has created the "Onward Together" organization as a way to raise money for political groups that will tell the public how great Hillary is. They are called "partners." The donations she solicits don't go directly to the partner organizations. They go to her organization, Onward Together, which then uses the money collected to advance Hillary's political brand. A clever technique, and some people will probably think it's a good thing to help Hillary as they help other, more grassroots groups.

Here, however, is the problem I have with the above solicitation: it's the use of the word "we."

"We," is a word of inclusion, and using "we" in a sentence means that there is some sort of joint and collective responsibility for whatever action is being described. In this case, Hillary says:

When we launched Onward Together....

This is a claim (I think intentional) that the recipient of the communication (me, in this case) was in some way involved in and part of creating the organization Onward Together. In fact, Onward Together was created of, by, and for Hillary Clinton and her chosen political projects. That sentence pretends a joint action that never existed, and I count that as "false familiarity."

Why should anyone care about things like this? Well, our politics does, truly, need to be "of," "by," and "for" the people. That is Abraham Lincoln's timeless description of what democratic self-government is all about.

I care about protecting and preserving genuine self-government in the United States. The more our politics is invaded by a politics that is not, in fact, "of" and "by" the people for which it claims to act, the more we can all get confused about what the true nature of our politics ought to be.

I think it is important to reject "empty calorie" politics in just the same way. The health of our democracy depends upon it!