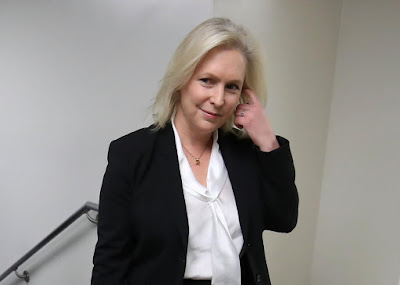 Pictured above is Kirsten Gillibrand, who is a United States Senator from New York. The article from which the picture is taken is headlined, "Kirsten Gillibrand Is Playing Her Cards Right."

Well, not with me she isn't.

Reproduced below, in its entirety, is an email I recently received from Kirsten Gillibrand. I'll comment after you read it:

Friend – I’m grateful and honored every day to have you on this team.

I’m inspired by your courage, your resilience and your persistence. By the way you keep showing up to protests and organizing meetings. By the way you’ve encouraged and supported the record numbers of women who have decided to run for office. By the way you’ve come together – from every corner of this country and every walk of life – to lead a national movement for real change that makes people’s lives better.

So I know that no matter what President Trump throws at us, we will not stop fighting for what’s right. Together, we’ll keep striving for a country where everyone has the tools and the opportunity they need to succeed. And I know that if we keep lifting our voices, we will be heard, and we will create a brighter future.

Thank you so much for standing with me in this fight.

Paid for by Gillibrand for Senate


Here is my problem with this email from Kirsten Gillibrand:


My problem with Gillibrand's email means I have a problem with her. In other words, I object to false flattery and a politics of data-driven manipulation.

The Internet and "big data" provide tools of incredible power, to those who can lay their hands on them. And the presidency provides great powers to the person who holds that office (as we are finding out, daily).

It is well known that Gillibrand is considering running for the presidency. Good luck! I am just not interested in supporting anyone for that office who doesn't insist that "personal" communications be based on some actual "personal" connection. Any politician who seeks to manipulate me with an email like the one above will be willing to try to manipulate the nation as a whole. At least, that's my best guess.

I'm delighted to get appeals from politicians who try to convince me that I should help them. But I don't want them to be an example of manipulative false familiarity. The above email might be very appropriate addressed to some of Gillibrand's supporters. People who do, already, have a relationship with her that allows her to claim that they are on her "team." That's not the right email for someone who has never had any contact with her at all.

Color me unimpressed with the way Kirsten Gillibrand is "playing her cards."