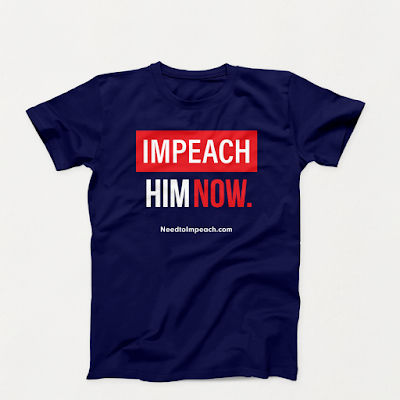 At 8:19 p.m. on election night (last night), I got an email from Tom Steyer, who has founded and funded a group called "Need to Impeach." The group is promoting an online petition asking the House of Representatives to impeach President Trump. Over six million people have signed this petition so far.


Steyer is identified by Wikipedia as "an American billionaire." Here was Tom Steyer's election night message to me:

Gary, you did it. The polls just closed on the West Coast, and it's official: You and 6.2 million members of this movement made the difference in electing Democrats to a majority in the House of Representatives.

We voted against Donald Trump’s inhumane, destructive policies and for a Congress that will hold him accountable.

Tonight is a step forward not just for Democrats, but for the future of America.

This is your moment — thank you for all you did to help.

This is what we set out to do. With control of the House, Democrats can release Trump’s tax returns, subpoena his family members, and, yes, launch impeachment proceedings.

Now, we need to keep the pressure on. In the coming weeks, I’ll be counting on you to call on your representatives to actively support impeachment.

Savor this victory, but know that the fight continues. Ask your friends to sign the petition and demand that our new Congress impeach Donald Trump.

I do not much like overfamiliar emails, which assume a relationship not existing in fact. I do not like deceptive and manipulative emails, either. I consider this email to me from Tom Steyer to have been both "overfamiliar," and "deceptive," and "manipulative." I am not one of the six million plus persons who have signed the "Need to Impeach" petition, and I don't know Tom Steyer personally. That reference to my name, "Gary," and his statement that I am part of "this movement," along with the complimentary "you did it" assertion, assumes a relationship that does not exist in fact. Steyer is clearly operating in just the same way that Kirsten Gillibrand is operating. I have complained about this kind of politics before. I am complaining again.

Furthermore, since Steyer's email referenced the closure of the polls on the West Coast, and reached me only nineteen minutes after the polls closed, I have deduced that the message was actually prepared ahead of time. It was not (as it presents itself) a quick note to supporters from someone who is feeling very good about the results of the November 6th midterm elections, written when those results were known.

Most importantly, while, I do happen to agree with Steyer that the policies being pursued by President Trump are both inhumane and destructive, an immediate move towards the impeachment of the President is not, in my opionion, a good way to show Mr. Trump to the door. In fact, I think that approach would quite likely have exactly the opposite effect. Pursuing impeachment in the way proposed by the "Need to Impeach" group is to turn the public into the bull, charging a presidential matador who will put the sword to its heart after driving the poor animal insane. Frank Bruni, columnist for The New York Times, has written an article, recently, talking about how best to beat the president politically. The following image, from the article captures exactly how the president is playing his opposition:

In other words, if the impeachment of the President is to be successful, the process needs to be based on something more than the fact that six million people and more would really like to replace President Trump with someone else (presumably with Vice President Mike Pence).

I would like to suggest that the new House of Representatives not spend time trying to prove that the President should be impeached, but instead pass a series of bills that would address, directly, the main concerns of the citizens of the United States, which include a secure system of health care for the people, income inequality, confronting the climate change crisis, and providing adequate housing for every person who lives in this country. The House might also propose ways to end the never-ending wars that presidents of all parties seem so fond of pursuing. It could even address the dysfunctional laws that relate to aslyum and immigration. Is the Senate likely to agree with such initiatives? Highly doubtful, but perhaps more possible than getting the Senate to agree to convict president Trump on Articles of Impeachment.

If we want a new president (and we definitely need a new president), we are only going to get there if our elected representatives (and the political candidate who eventually opposes president Trump in 2020) are able to offer up a positive set of programs and policies that will persuade the voters that someone else ought to be running our government.