The "Insight" section of The San Francisco Chronicle that arrived on my front porch on Sunday, October 28, 2018, had a cover that posed this question: "Voters can make a difference - but will they?" The Chronicle expressed some skepticism, especially with respect to the so-called "Millennials," those born in the years between the early 1980s and the mid-to-late 1990s.

I hope people do vote. I am joining the chorus! Today is the day. The Chronicle is certainly correct that "voters can make a difference."

Let me provide an additional comment, however. If voters are much less enthusiastic about voting than the pundits and the publishers would like, I do think there is a reason for that. What can excite us about political participation, in my view, is not so much "voting" as the experienced reality of our personal and direct involvement in "self-government." This means a government in which we, ourselves, are directly and personally involved.

To get a feel for what I am talking about, check out that fairly recent blog post on Gandhi (The Cure) for a hint about the kind of self-sacrifice that is a necessary part of a truly participatory politics.

That's not very inspiring. It's not very motivating. And that is also one of the central objections to government that motivates the populist "right."

Get out and vote. Please! But let's not forget that what we really need is more self-government, a government of and by ourselves. That is what we actually need. That's going to require us to get involved, personally, way before we get to the ballot box. 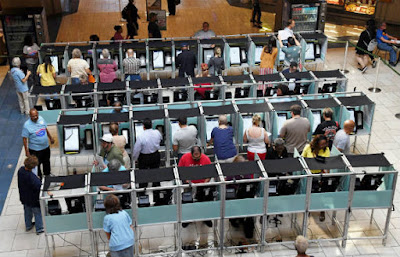