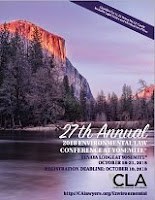 Should trees have standing? That is the title of a rather famous book by Christopher D. Stone, who is an Emeritus professor at the USC Gould School of Law. The book was first published in 1996 and is now in its third edition.

At the 27th Annual Environmental Law Conference at Yosemite, held during the last week of October, Judge Margaret McKeown, who serves on the Ninth Circuit Court of Appeals (the federal appeals court that handles appeals from federal district courts located in Alaska, Hawaii, and California, plus other western states) spoke to the idea that "Nature" should be given the right to come into court to complain on its own behalf about the insults and injuries visited upon the Natural World by human activity.

"Standing" is a word of art, and means the legal right to come into court. You can't maintain an action in any federal court unless there is a demonstrable "case or controversy" in which your interests are directly affected. If you can demonstrate that kind of direct impact upon you, then you have "standing" to raise your issues and to have them judged.

Nature couldn't represent itself in court directly, of course. Trees, rivers, mountains, and deserts are impressive and sometimes imposing, but they can't move around a courtroom and speak up when needed. On the other hand, it is the rare litigant in federal court who is not represented by an attorney. If trees had "standing," there would be lots of attorneys willing to represent them.

At a time when extinctions are occurring at horrendous rates, and as irreplaceable natural environments are being laid to waste by human activity, let's give Nature its day in court.

Check out Stone's book. I hope you'll agree that trees, and the Natural World in general, should be able to litigate and defend its existence. It's a matter of life and death.