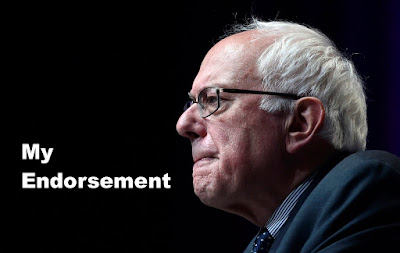 News articles are speculating that Bernie Sanders is planning to endorse Hillary Clinton, before the Convention. I, personally, hope that Bernie Sanders doesn't do that. As I explained in an Op-Ed not too long ago, a representative democracy presumes that elected representatives are going to be allowed to vote for those whom they represent. While Hillary Clinton is "leading" Sanders in pledged delegates by a substantial margin, and while the Party leaders who are "super delegates" are overwhelmingly in favor of Clinton, Clinton still doesn't have enough pledged delegates to have been elected before the Convention.

Since almost 60% of the Democratic Party voters who voted in the June Primary Election in my county voted for Bernie Sanders, I believe they expect their elected delegates will represent their wishes by voting for Bernie Sanders at the National Convention. Delegates like me, in fact (as opposed to the so-called "super delegates"), are called "pledged" delegates, since we are pledged to vote for the candidate on whose behalf we were elected. If (as is apparently pretty certain) the Sanders delegates get outvoted, then the Convention will select Hillary Clinton as the Democratic Party candidate, and that, again, is how representative democracy works. The candidate who gets the most votes wins. At least, that is how it is supposed to work. Somehow, that principle apparently got lost somewhere along the line in that Gore-Bush Presidential election.

Many of the news articles discussing a possible pre-convention endorsement of Clinton by Sanders note that Sanders' supporters will be very disappointed if such a pre-Convention endorsement occurs. Many of these Sanders supporters and delegates to the Convention are new to the Democratic Party (I'm not, by the way). Query whether these new recruits to the Democratic Party will stick with the Party if they think that the Party is being operated to suppress the expression of their opinion. That is what they will think, I am pretty sure, if long time Party leaders succeed in beating up Bernie to the extent that he makes a pre-Convention endorsement that will tend to cut off the ability of Sanders elected and pledged delegates to cast their vote for the candidate favored by the voters they represent. The idea that elected Democratic members of Congress would "boo" Bernie, which reportedly occurred, is a demonstration that some of these Party leaders are less committed to the democratic process than they are to forcing those with different views to hew to the "Party line."

My advice to Democratic Party leaders: let the Convention delegates vote. Stop pressuring Bernie Sanders to make a pre-Convention endorsement. That's totally in the self-interest of the Party, because all those new Party members who support Bernie are much more likely to stick with the Party, in November and beyond, if they think that the Party has treated them, and their candidate, fairly.

And here's my advice for the new Democrats who support Bernie Sanders. Stick with the Party, and take it over. We made a huge amount of progress this time, with Bernie Sanders' great leadership helping to do that. But a person would have to be naive to think that the big-money Democrats who have taken over the Party of Roosevelt are going to give up their power without a fight.

You have to "take" political power, and that "takes time."

That "political revolution," I hope, has only just begun!