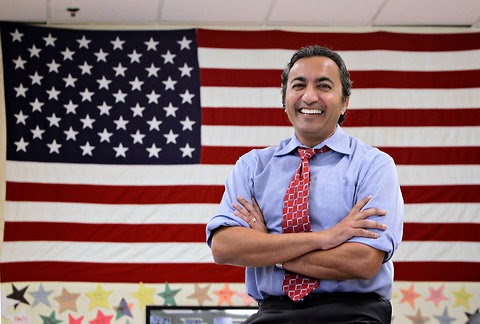 Pictured is Dr. Ami Bera, M.D., who represents California's 7th Congressional District in the United States House of Representatives. Dr. Bera's most recent race for reelection, in November 2014, was the most costly Congressional contest in the country. He won, and I am glad he did. I think I contributed a small amount of money to his campaign.

The email I received from Dr. Bera last Wednesday provided a kind of introduction to "cognitive dissonance." It had a heartening title: "Democracy is NOT for sale." At the bottom of the email (which was quite brief) was a big red button saying, "DONATE."

I would like to think, as Dr, Bera says, that Democracy is not "for sale," but our current campaign spending laws (as most recently demolished by the United States Supreme Court) actually make that statement rather problematic. In the Bera election, the side that spent the most money won. That tends to be the way it goes, everywhere.

We need a prescription for campaign finance reform. If we care about the future of democracy, that's what the doctor has to order.