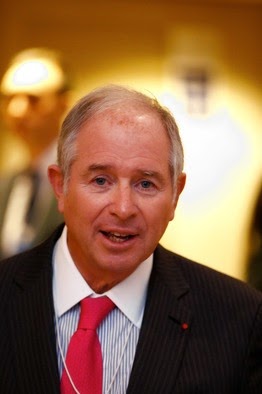 Pictured is Stephen Schwarzman, the founder and Chief Executive of Blackstone Group LP, a private-equity firm. According to the firm's website, Mr. Schwarzman is "an active philanthropist with a history of supporting education and schools."

Mr. Schwarzman certainly has a large ability to be generous. The photo comes from an article in the February 28, 2015 edition of The Wall Street Journal. That article told the world about Mr. Schwarzman's "record payday."

The average annual family income in the United States during 2014 was $53,891. In other words, it would take an average income family 12,804 years to earn the same amount of money that Mr. Schwarzman made in one year.

Mr. Schwarzman's compensation for 2014 was $1,313 per minute, each minute of every day, counting all twenty four hours. That's a lot better than the official federal minimum wage in the United States, which is $7.25 per hour (not minute), and you only get paid that amount for the time you actually work. Mr. Schwarzman gets his $1,313 every minute, no matter what he is doing.

Mr. Schwarzman probably puts his pants on one leg at a time. He would not, necessarily, beat out the other contestants on Survivor, either. Of course, there wouldn't be much inducement for Mr. Schwarzman to go on Survivor, considering that the big prize on Survivor is $1,000,000, and Mr. Schwarzman earns that amount every twelve hours, just by "being there," and he doesn't have to eat any worms, or similar unappealing foodstuffs, to get that million.

My Two World hypothesis is that "we" make the rules that establish the human world in which we most immediately live. There is no "natural law" that makes it inevitable that Mr. Schwarzman's income should be 12,804 times as large as the income of an average income worker.

Let's not get confused, folks. Mr. Schwarzman's "record payday" is not the result of his exceptional personal talents (however great those may be). The money he collected he gathered because the "rules" in effect produced this result. The money he got is not "his" money. We are in this together. The wealth produced by our society is produced by our society. How that wealth gets distributed is determined by the rules we set up.

With due deference to Mr. Schwarzman and the others like him, I think it's time to change the rules.