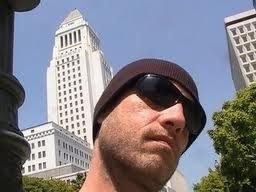 A federal court ruled on August 8th that a verbal attack on an elected official is constitutionally protected (even if that speech is filled with foul language). The case at hand involved the speech and conduct of one Zuma Dogg, in appearances before the Los Angeles City Council.

According to the news story from which I got this picture, Zuma Dogg is a former radio executive, turned performance artist, turned community advocate. It is pretty obvious that he likes to speak out, and specifically likes to speak out before the Los Angeles City Council.

In my hometown of Santa Cruz,  Robert Norse was ejected from a meeting of the Santa Cruz City Council, on the basis that he was disrupting the Council's proceedings. Norse's disruptive action consisted in making a mock Nazi salute after the Mayor stopped another person from continuing to speak, when that person's allotted public comment time had expired. Legal proceedings are still underway in the Norse case, as best I can tell, though the City's action against Norse has so far been justified in the courts.

In the case of Zuma Dogg, who spoke out against a member of the Los Angeles City Council, the court came down on the side of the critic, not the government:

The court finds the discussion of a councilman’s alleged criminal activities is relevant to a discussion of funding that the City intends to give to that councilman’s District. Indeed, this incident is exemplary of why it is unconstitutional to restrict speakers from making personal attacks in City Council meetings; it chills speech critical of elected officials, which is speech at the heart of the First Amendment. In one of the largest cities in the world, it is to be expected that some inhabitants will sometimes use language that does not conform to conventions of civility and decorum, including offensive language and swear-words.


While the City Council has a right to keep its meetings on topic and moving forward, it cannot sacrifice political speech to a formula of civility. Dogg “may be a gadfly to those with views contrary to [their] own, but First Amendment jurisprudence is clear that the way to oppose offensive speech is by more speech, not censorship, enforced silence or eviction from legitimately occupied public space.” Gathright v. City of 18 Portland, Or., 439 F.3d 573, 578 (9th Cir. 2006).


The city that silences a critic will injure itself as much as it injures the critic, for the gadfly’s task is to stir into life the massive beast of the city, to “rouse each and every one of you, to persuade and reproach you all day long.” (‪#‎PLATO‬, Five Dialogues, Hackett, 23 2d Ed., Trans. G.M.A. Grube, 35 (Apology).) 24


The court GRANTS summary judgment to Plaintiffs on the as-applied challenge to the Rules of Decorum.

Having served as an elected official for twenty years, and having endured my share of personal attacks (and some of them not too polite), I want to say that I am encouraged by this recent ruling by the United States District Court for the Central District of California.

Democracy takes a tumble when we require government critics to park their passion at the door, and to be "polite" when they make their complaints. Let's be more emboldened, every one of us, to say what we really think about how our government is being run!