Before I left on my trip to Yellowstone, I was pleased to read editorials in both the San Jose Mercury News and the Santa Cruz Sentinel that highlighted the need to take climate change seriously.

In the editorial that appeared in its August 9th print edition, the Mercury listed some of the problems we can expect to face as climate change and global warming continue. Among the identified problems were increasing droughts, forest fires, and flooding. The Mercury editorial concluded as follows:

If we care about the lives our great-grandchildren will live on Earth, then we have to act. And action has to start somewhere. We're proud that one of the places setting the pace for a better future is California.

The Sentinel editorial was similar (which is not surprising, since both papers are owned by the Bay Area News Group). It explained the climate challenges facing us as follows:

The need for solutions is growing ever more imperative as carbon dioxide emissions remain high, even if per capita emissions are lower today than in 1990. Equally ominous, the concentration of carbon dioxide in the atmosphere has climbed above 400 parts per million, more than a third higher than in 1800. The result has been global warming of about 1.5 degrees Fahrenheit, an outcome that will take at least 1,000 years to overcome. The California report found that at Lake Tahoe, there are now 30 fewer days a year when air temperatures average below freezing compared with a century ago. Meanwhile, only 34 percent of the precipitation at the lake today falls as snow, compared to 52 percent in 1910. Less snow means less runoff and less water for farms and cities.

Clearly, Californians are facing a challenge we hope will mean alternatives are more quickly embraced. Already, in more liberal areas of the state, electric vehicles, solar electricity, wind power and more energy efficiency have become less an alternative and more a part of everyday life. These trends need to become more widespread and affordable.

The Sentinel concluded its editorial with this statement, showing itself perhaps a little less complacent than the Mercury, about progress to date, and a bit more focused on the urgency of immediate action:

Slowing and stopping climate change will take some time -- and a lot of innovation. The best hope we can think of is California's entrepreneurial tradition.

Our state can lead the way. Starting now.

It's that "starting now" I liked the most. The fact is, as indicated in the chart below, California is way out in front of other states. That's the point emphasized by the Mercury, and that is all to the good, but it's not enough. If we don't all "start now," and do more, then I think it won't be our great grandchildren who will be facing difficult lives.

It will be us! 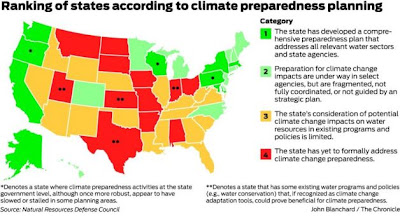