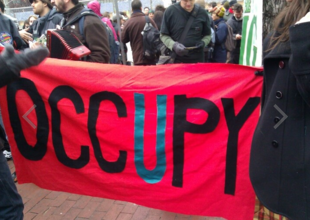 Click right here, or on the image, for an interview with Stephen Lerner, a labor organizer who created the successful Justice for Janitors campaign.

Lerner likes the "Occupy" movement, which he says is "sort of theory and practice meeting." On the "theory" side, Lerner says that one of the reasons that his Justice for Janitors campaign worked was that "we had an analysis of who had power."

Thinking ahead to 2012, we of the 99% party need to base our efforts on just such an analysis. As we do that, I don't think we should overlook the power of local government. Local government agencies are "our" institutions, supposedly responsive to our concerns. We need to start having our local governments become part of the "Occupy" movement, not the locus of efforts to displace and destroy it, by acting as agents of the 1%.

My experience convinces me that local government can act as a kind of "megaphone" for community level concerns, aiming the arrows of local government power at targets at the state and federal level.

Next year, "Occupy Local Government" might be a good slogan to consider.