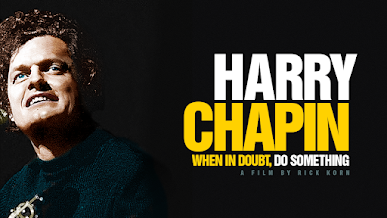 Harry Chapin, "an American singer-songwriter, philanthropist, and hunger activist," died in 1981. The image above announces a new film celebrating Chapin's life, released last month in honor of what would have been Chapin's 80th birthday.
I don't really know much about Chapin (except that it is clear to me that he died way too young). Chapin was born on December 7, 1942. I was born, a little later in December, in 1943. I'm still going. I wish Chapin were, too!
The title of the film honoring Chapin has spurred me to post this comment. "Do Something" is what I think of as a "cri de coeur," a plea to ourselves, and to others, not to continue all that "Blah, Blah, Blah" that passes for some kind of appropriate response to what human beings have done to this lovely world into which we have been so privileged to have been born.
But what to do? "Do Something" seems to indicate, by its very phrasing, that we don't know what we either can or should do. That "Do Something" plea comes out of a place located right next door to "despair," a place in which we know that things are bad, a place in which we can't quite see a way out.
Here is the thought that came into my mind when I saw the advertisement for the film: We tend to think that "science" can (and hopefully will) save us from the problems that we have created. In general, human beings have wagered their future, and the future of human civilization, on the idea that whatever the problem may be, science can "save us." Science, we hope, will provide a solution to all those problems we have created for ourselves.
Most of us, at least, do believe in the power and efficacy of "science" to solve our problems (or at least to help solve them). Others, of course, do not - people like Guy R. McPherson, the "no hope guy."
I refuse to eliminate possibility and "hope," that "action verb," and so I guess I'll have to be on the side of "science." We tend to equate the "scientific method" with "investigation," and "observation," and "research," all of which are important aspects of science, of course, and what we often tend to think as its essence.
Scientific experiments, though, which are really at the heart of the "scientific method," begin with "action," not "observation." We "do something," and then we see what happens; we see if it works. If it doesn't work, we try something else.
As we face what could be the ultimate challenge to our human existence on Planet Earth (that's how McPherson would put it), we need to "Do Something."
No more "Blah, Blah, Blah."
Let's "Do Something," as Harry Chapin is said to advise. The problems are big. The "Do Something" we need will have to be big, too. Maybe it will work. Maybe it will help.
And if it doesn't?
Let's Do Something Else!
To Subscribe Just Click This Link
Image Credit:
https://mailchi.mp/abramorama/harrychapin-whenindoubtdosomething