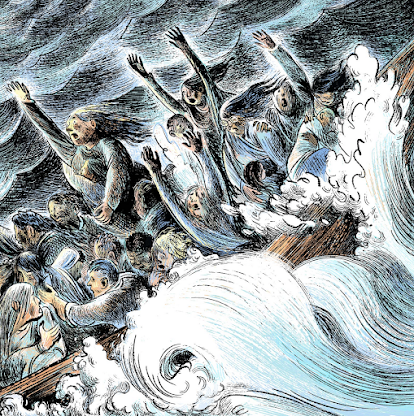 Elizabeth Kolbert's article on climate change, in the November 28, 2022, edition of The New Yorker, is titled, "A Vast Experiment: The Climate Crisis From A to Z."
There are twenty-six sections in Kolbert's article, each headed by a letter of the alphabet. In the text that follows these letter headings, Kolbert uses bold type to emphasize a word, or words, that begin with the appropriate letter. Here is the start of the "A" section:

Svante Arrhenius was, by nature, an optimist....

Kolbert goes on to tell us that Arrhenius was a scientist who founded the Stockholm Physics Society in 1891, and who was apparently the first person to be able to explain how the ice ages had occurred, which at that time was a great mystery. The ice ages were caused, Arrhenius argued, by a reduction of carbon dioxide in the atmosphere, leading to a cooling of the planet.
Since the industrial revolution was then underway, with bellowing coal-fired furnaces adding massive amounts of carbon dioxide to the atmosphere, Arrhenius predicted that global warming was going to be coming. He thought that global warming was going to be a pretty good thing, too. The way Arrhenius saw it, global warming was going to make the planet a little more "cozy," as we all lived happier lives under "a warming sky."
I was particularly interested in the "B" section of Kolbert's article, almost a full page in the magazine. The first few paragraphs of the "B" section are reproduced below:

On September 28, 2021, at the Youth Climate conference, held in Milan, Greta Thunberg took the stage. Sitting near her was the city’s mayor, Giuseppe Sala, wearing a mask. Thunberg, who is five feet tall, could barely be seen over the lectern. She had removed her mask and was smiling.

“Climate change is not only a threat, it is above all an opportunity to create a healthier, greener, and cleaner planet which will benefit all of us,” she began. “We must seize this opportunity—we can achieve a win-win in both ecological conservation and high-quality development. . . . We need to walk the talk; if we do this together, we can do this.

“When I say ‘climate change,’ what do you think of?” she went on. “I think of jobs—green jobs.” This received a round of applause.

“This is all we hear from our so-called leaders: words—words that sound great, but so far have led to no action,” Thunberg said. “Of course we need constructive dialogue, but they’ve now had thirty years of blah, blah, blah, and where has that led us?”

I think The New Yorker's paywall is rather porous. If you click this link, there is a good chance you'll be able to read the whole article. It's worth reading, too. While Kolbert provides some real reasons to think that we might do something that will be effective, and that will help us to meet the climate crisis, the article can hardly be classified as optimistic.
In the "D" section of her article, Kolbert warns us against "Despair." That is always good counsel, but Kolbert doesn't pull any punches when she describes what is ahead. Another "D" word describes the kind of challenges we absolutely must confront. She doesn't deploy this word, but I am going to, right here.
If we are realistic about what we face, we must admit that the challenges before us are: "Daunting."
If you don't have time to read the entirety of Kolbert's article, I think I can sum it up pretty quickly:
NO MORE BLAH, BLAH, BLAH.....
To Subscribe Just Click This Link
Image Credits:
https://www.newyorker.com/magazine/2022/11/28/climate-change-from-a-to-z