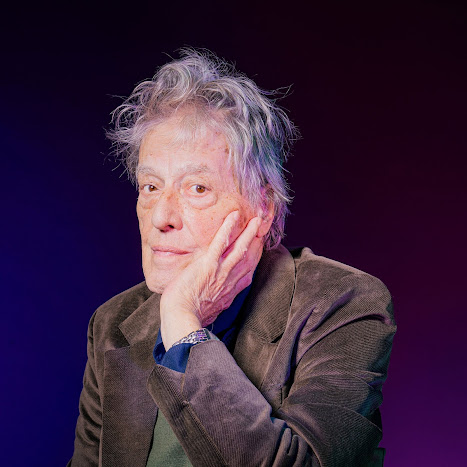 David Marchese is The New York Times' "Talk Columnist." If you click that link to Marchese's name, The Times' paywall permitting, you should be able to sample a wide variety of Marchese's interviews, including his interview with playwright Tom Stoppard, who is pictured above. The Stoppard interview appeared in The New York Times Magazine on December 4, 2022, titled as follows in the online version: "Tom Stoppard Fears the Virus of Antisemitism Has Been Reactivated."
I love Tom Stoppard (and all his plays). Stoppard's latest play, "Leopoldstadt," does confront antisemitism. What I found most interesting in the interview was how Stoppard intimates that an effective way to deal with hateful and objectionable behavior (both conduct and speech) may be simply to call it out, and, having done so, to "shrug it off," turn one's back on it and walk away, much more than by trying to extirpate the evil in an agitated and aggressive confrontation.
Stoppard does not say that this way of confronting evil (including both antisemitism and other evils) should be some sort of "rule." He just evidences his own confidence that he (and we) can prevail over evil, and hateful and objectionable behavior, without moving to immediate hyperventilation and direct conflict.
Here is a sample of what I mean, focusing on both antisemitism and hate speech, coming out of the Marchese talk with Stoppard:

I hate to ask such a blunt question, but apparently this is where we are these days: What do you make of the increase in antisemitism that we’ve been seeing? Does it feel like more of the historical same or is something different going on? I don’t profess to know anything that anybody else might not know, but my own feeling is that marginal social attitudes never go away. They’re something like a latent virus that becomes activated under certain conditions. For my money, which is the mot juste in this sentence, it has a lot to do with the polarity in the economics in America and Britain — the inequality. When the economics that are supposed to bind us together become so divisive, anger breaks through. This virus wakes up, and it’s a displacement of the anger that is always lying underneath. As I listen to myself talking like a pundit, I don’t actually know if any of that is true. It’s just an intuition I have. It’s as if at the bottom of the mythic melting pot, which your nation wants to be, there’s a deposit of sediment that isn’t buying into the idea of being in the pot. It stays silent and mostly invisible until you poke it with a stick and suddenly, as you say, here we are. The last thing: My friend David Baddiel wrote a book called “Jews Don’t Count” —

A few years ago, yeah. I’m familiar with it. Oh, good. Then as you know its point is that antisemitism is not being properly acknowledged, and that Jews are not being properly acknowledged as being one of the many oppressed minorities. Jews don’t seem to count, David Baddiel objects. He’s a friend of mine, and I have arguments with him about various things. He didn’t need me to point out that one doesn’t think of Jews as being an oppressed minority because, paradoxically, the objection is that they’re altogether too successful. When I was writing the play, there was a kind of local disturbance concerning antisemitism in the British Labour Party, and it didn’t seem to be an overriding problem, and I kind of ignored it. It seemed to be not widespread. I’m not sure whether that would apply anymore.

I know that free speech has been an important issue for you over the years. It’s impossible to argue that social media isn’t a fertile breeding ground for, as you put it, the virus of marginal social attitudes. Do we need to more strictly police the speech on those platforms? I would like to be in a society that pretty much refrains from stopping people saying what they want. Hate speech always strikes me as being self-evidently gibberish and deranged. I don’t think that it’s an equal participant in some kind of debate. I don’t like the idea of law deciding whether something is sayable or unsayable. I’m sure that there’s a line that shouldn’t be crossed, but like all such lines, there’s no one person whom you know whom you would want to draw it, and I’m not sure that any two people would ever draw it in the same place. I would prefer to meet hate speech with derision and better arguments. That is the tradition I’ve grown up in: that you can say anything you like as long as it doesn’t break the law. It’s rare that you get some nutso being explicit about prejudice and bigotry which the law might well take account of. But you can get into a shadowy area where interpretation becomes as important as speech itself. The people who are canceled in our society, in many cases it’s hard to say definitively what the offensive words were or what they intended. I don’t even know where I would personally draw my lines, but I think antisemitic speech is very offensive, it ought to be very offensive to society, and society should show its contempt for it. I hope, broadly speaking, society still does.

So what, to your mind, would be the best response to antisemitism? I have absolutely no doubt what the solution is, but it’s very long term, and it’s not a solution that you can simply adopt. The solution is to develop a society in which these issues barely arise because the society is fair. In many issues, I think, God, if only we could start education again from the bottom up. Just now begin with the next generation of 5-year-olds and teach them the philosophy of life. But the glib and undeniable answer to your question is to create a society where you don’t have to deal with antisemitism because it’s simply not part of anybody’s consciousness. It’s a utopian idea.

Confrontation escalates. A simple insistence on decency and fairness can have the opposite effect. I think that is what Tom Stoppard is suggesting in this short little discussion with David Marchese.
Gets me to thinking! And I hope you the same!
To Subscribe Just Click This Link
Image Credit:
https://www.nytimes.com/interactive/2022/11/28/magazine/tom-stoppard-interview.html