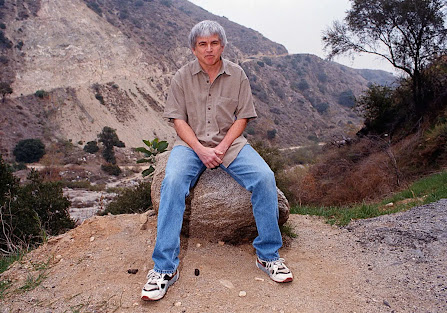 This seems an age of catastrophe, but it’s also an age equipped, in an abstract sense, with all the tools it needs. Utopia is available to us. If, like me, you lived through the civil rights movement, the antiwar movement, you can never discard hope.

The quotation above - and the picture - are taken from an obituary in The New York Times: "Mike Davis, Who Wrote of Los Angeles and Catastrophe, Is Dead at 76."
I didn't know Mike Davis, but his obituary in The Times makes me think I did - I should have. We had a lot of common experiences, though I was definitely a Northern California guy. LA was a foreign country to me, during the time I was part of the antiwar movement, and supporting Students For A Democratic Society. Even though I was not really familiar with Los Angeles and Southern California, I avidly read Davis' book, City of Quartz, when it was published in 1990.
I am presenting the entire obituary below, because readers of this blog posting might otherwise be frustrated by The Times' paywall, should they like to find out more about Mike Davis. He is no longer with us, but you can still read his books!
Below is the full obituary, by Neil Genzlinger, as it appeared in The New York Times on October 26, 2022. The headline is my own:
You Can Never Discard Hope
Mike Davis, an urban theorist and historian who in stark, sometimes prescient books wrote of catastrophes faced by and awaiting humankind, and especially Los Angeles, died on Tuesday at his home in San Diego. He was 76.
The cause was esophageal cancer, his daughter and literary agent Róisín Davis said.
Mr. Davis, an unabashed leftist who once organized antiwar rallies for Students for a Democratic Society and was arrested at several protests, garnered considerable attention with his second book, “City of Quartz: Excavating the Future in Los Angeles” (1990), in which he wrote that Los Angeles “has come to play the double role of utopia and dystopia for advanced capitalism.”
That book examined the mythologies that had evolved about Los Angeles and Southern California, thanks to noir movies, surf culture and Hollywood, and contrasted those images with the harsh realities faced by thousands of Angelenos, especially members of minority groups.
“What we’re going to find out in short order is that for tens of thousands of people, there’s only one rung of the ladder,” Mr. Davis told The Los Angeles Times in December 1990, just after the book’s publication. “There’s no place to climb up.”
That comment, and the book, seemed particularly prophetic a little more than a year later, in April 1992, when disastrous rioting swept South Los Angeles after a jury did not convict four police officers who had been charged with assault in the beating of Rodney G. King, which had been captured on videotape.
Mr. Davis acquired a reputation as a seer, though in the preface to a 2006 reissue of that book he resisted that characterization.
“If there were premonitions of 1992 in ‘City of Quartz,’” he wrote, “they were simply reflected anxieties visible on every graffiti-covered wall or, for that matter, every lawn sprouting a little ‘Armed Response’ sign,” a reference to the home security warning placards that become ubiquitous on the lawns of the affluent in the 1980s.
Mr. Davis turned to fires and other natural disasters in “Ecology of Fear: Los Angeles and the Imagination of Disaster” (1998), which included a particularly provocative chapter titled “The Case for Letting Malibu Burn.” That book too came to be seen as prophetic, and Mr. Davis found himself being interviewed every time devastating fires came through the area. Though nature delivered the wrath, he wrote, hubris and greed deserved the blame.
“Los Angeles has deliberately put itself in harm’s way,” he said in the opening chapter. “For generations, market-driven urbanization has transgressed environmental common sense. Historic wildfire corridors have been turned into view-lot suburbs, wetland liquefaction zones into marinas, and floodplains into industrial districts and housing tracts. Monolithic public works have been substituted for regional planning and a responsible land ethic. As a result, Southern California has reaped flood, fire and earthquake tragedies that were as avoidable, as unnatural, as the beating of Rodney King and the ensuing explosion in the streets.”
Economics was a constant undercurrent for Mr. Davis. The fires that he warned about, he noted in a 2018 interview with the magazine Jacobin, not only were destructive, they also increased inequity.
“The rebuilding just produces bigger, more expensive homes,” he said, “while the trailer parks and the homes of people who didn’t have adequate fire insurance through wealth are displaced.”
His 2005 book, “The Monster at Our Door: The Global Threat of Avian Flu,” talked about the likelihood of pandemics. Matt Steinglass, reviewing it in The New York Times, called it a “brilliant, concise jeremiad.” Among other things, Mr. Davis wrote in that book that pandemics would affect low-income people disproportionately, an assessment borne out years later by the Covid-19 crisis.
Detractors questioned the accuracy of some of Mr. Davis’s assertions and the hyperbole of his prose. That criticism seemed to peak after he won a $315,000 MacArthur “genius” grant in 1998.
“A lot of writers are tired of Mike Davis being rewarded again and again, culminating in the MacArthur fellowship, for telling the world what a terrible place L.A. is,” Kevin Starr, California’s state librarian, told The Los Angeles Times in 1999.
Supporters said the critics were resentful that his books, unlike theirs, made best-seller lists, and that he had achieved success without a Ph.D. Mr. Davis said his political views were also a factor.
“I understand having acquired a public stature and being someone with unpopular ideas that I’m going to get attacked — being a socialist in America today, you better have a thick skin,” he told The Los Angeles Times. “There is a kind of intolerance in the city for people who say things that went wrong haven’t been fixed.” 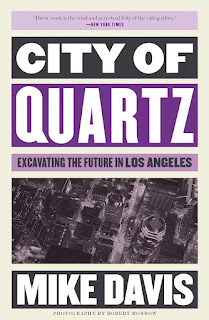 Michael Ryan Davis was born on March 10, 1946, in Fontana, Calif., about 50 miles east of Los Angeles, to Dwight and Mary (Ryan) Davis. He spent his early years in Fontana before his family moved to the San Diego area.
His father was active in the meat cutters union, and the struggles Dwight Davis experienced made a strong impression on his son, who described his father as a patriotic man who had faith in the inevitability of human progress.
“By the end of his life, he’d seen his union destroyed and his pension plan taken away,” Mr. Davis said in 1998. “It’s hard to see your parents lose their beliefs.”
Also formative was an experience he had at 16: A cousin took him to a civil rights rally in San Diego organized by the Congress of Racial Equality.
“The courage and moral beauty of what these ordinary human beings were fighting for struck me,” he said, “and I have never forgotten it.”
At about the same time, he became a meat cutter himself for two years when his father became ill. He also began working for Students for a Democratic Society, helping to organize antiwar rallies.
In his 20s he joined the Teamsters union and drove a truck for five years. His routes took him all over Southern California, acquainting him with its geography and its varied communities, knowledge that would underpin his writing.
He didn’t start on his path to becoming a scholar until relatively late: At 28 he enrolled at the University of California, Los Angeles, aided by a scholarship from the meat cutters union. He eventually earned a bachelor’s degree in economic history there, and also studied in Britain. After graduating he lived in Britain for several years, serving as managing editor of New Left Review, a Marxist journal. In 1986 he returned to California to teach at the Southern California Institute of Architecture in Santa Monica.
That same year his first book, “Prisoners of the American Dream: Politics and Economy in the History of the U.S. Working Class,” was published. The formidable title was off-putting, and so was the text. John Gabree, in a review in Newsday, said that Mr. Davis “writes in the sometimes impenetrable style of a social scientist.”
He adopted a more reader-friendly approach in “City of Quartz” and his later books, many of which made best-seller lists. They included “Dead Cities, and Other Tales” (2002), “Planet of Slums: Urban Involution and the Informal Working Class” (2006) and, most recently, “Set the Night on Fire: L.A. in the Sixties” (2020), written with Jon Wiener. Among Mr. Davis’s admirers is Jay Caspian Kang, a staff writer for The New Yorker and a former opinion writer for The New York Times.
“The best writers burrow themselves in the back of your eyeballs and color everything you see,” Mr. Kang wrote in The Times in June after Mr. Davis said he was stopping cancer treatments. “Davis is that for me — my California is the California he excavated through his reporting, his scholarship, his activism and his unflappable moral integrity.”
Mr. Davis’s wife, Alessandra Moctezuma, survives him. Four previous marriages ended in divorce. In addition to his daughter Róisín — from his third marriage, to Brigid Loughran — he is also survived by a son, Jack Spalding Davis, from his fourth marriage, to Sophie Spalding; and a daughter, Cassandra Davis, and a son, James Connolly Davis, both from his current marriage; and a sister, Janna Lazelle-Lake.
In an interview with The New Yorker in 2020, Mr. Davis was asked if he thought Los Angeles might experience another wave of violence.
“The socioeconomic conditions that produced the ’92 riots are still with us,” he said. “The Rodney King beating and police detonated it, but the riots came in the midst of a recession and revealed a city in which hundreds of thousands of people were living day by day, with no reserves.”
Yet he wasn’t all pessimist all the time.
“This seems an age of catastrophe,” he said, “but it’s also an age equipped, in an abstract sense, with all the tools it needs. Utopia is available to us. If, like me, you lived through the civil rights movement, the antiwar movement, you can never discard hope.”
oooOOOooo
To Subscribe Just Click This Link
Image Credit:
https://www.nytimes.com/2022/10/26/books/mike-davis-dead.html