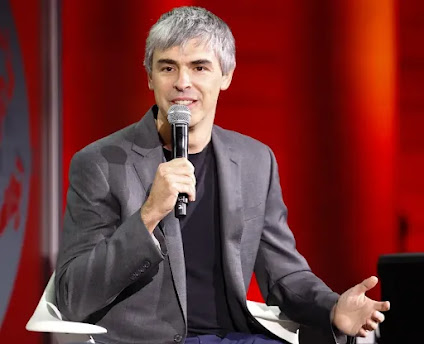 That is Larry Page, pictured above. He is one of the co-founders of Google. He is also number six on a list, compiled by Forbes, of the 400 richest people in the country. I almost said "men," but there are a few women on the list. Want to see the entire Forbes 400 list? Click right here!
If you'd like to pare it down a bit, and don't have time to look through a listing of 400 people, you can use the following link for an article that is headlined, "80 California Billionaires Make Forbes 400 List Of Super Rich." That's where I got the picture of Larry Page.
I, personally, qualify as a "Native Son of the Golden West," meaning that I was born in California, and when it comes to naming the billionaires, I always like to keep my focus local. I don't need to keep track of every billionaire in the nation or the world. My envy and outrage can be confined to that list of eighty! Maybe you're the same!
Actually, I like to think, I am not really that "envious" of the billionaires who have made that Forbes 400 listing (California-based or otherwise). A certain quotient of "outrage," however, might be admitted.
For a nation of such great wealth, isn't it something worthy of condemnation, not congratulation, that a rather short list of people controls such a large percentage of land, money, and everything else, including both personal celebrity and political influence?  I do have an "egalitarian" bias, I have to confess, based on my belief that we are "all in this together."
Generally speaking, it seems to be natural to equate wealth with importance, but who is important, actually? My answer? EVERYONE is important.
We are, in fact - and it isn't just a feel-good slogan - "in this together." The enterprises and activities that have produced the wealth that is documented in these lists of the billionaires were not created and made successful ONLY by the persons who have ended up with the most money. Wouldn't we all be better off if we were able to reduce the economic inequality that these lists of the billionaires document, and make sure the benefits of human ingenuity and activity were distributed to everyone - at least to the extent that everyone would could live a life that includes sufficient food, housing, health care, education, and safety?
That would seem fair to me, and that, at least, is what I suggest should be our economic, social, and political goal. We might start thinking of this as a "global" objective, too.
Such a more egalitarian distribution of the wealth that we all help produce isn't going to happen, though, is it? Well, it certainly isn't unless we change the rules.
And who makes the rules?
When I ask that question, I am back to that old Abe Lincoln prescription. Right near the end of the Civil War, which was fought to end a system of wealth acquisition based on slavery, Lincoln told us that the Civil War had been fought to ensure that a "government of the people, by the people, for the people, shall not perish from the earth."

OF the people, and BY the people means that we have to get involved in government ourselves. Personally!
I happen to know, from my own personal experience (in mostly a local context, I admit) that when more people get personally engaged in politics, in making the government do what most people want, in making the government do what we believe we need, the theoretical principle, articulated above (and which is hard to disagree with in principle) actually does work!
To Subscribe Just Click This Link
Image Credit:
https://patch.com/california/capitola/s/iey34/80-california-billionaires-make-forbes-400-list-of-super-rich