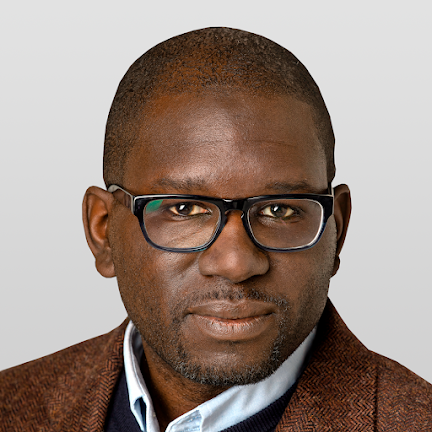 Jamelle Bouie, pictured above, writes for The New York Times. So does Ezra Klein, pictured below. 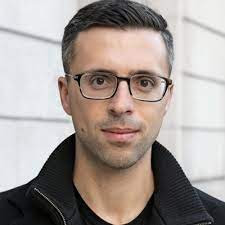 On Sunday, November 13, 2022, both Klein and Bouie wrote about the aftermath of the nation's midterm elections - those elections in which a predicted "Red Tide," favoring the Republican Party, did not appear. In fact, with all the ballots still not counted in California (and perhaps elsewhere), it could be that the Democrats will not only retain control of the Senate; it's possible that they might continue to have a majority in the House of Representatives, too. It's certainly going to be close.
Faced with these unexpected results, Klein propounded "Three Theories About This Political Moment." While Klein said he wasn't much for "postelection narratives," his article took up more than half of a two-page spread in The New York Times opinion section.
Klein first noted the "calcification" of our national politics. Whereas voters used to switch their allegiances between the nation's two main political parties, that is no longer true. However, as Klein noted, while voter allegiances have "calcified," there is a near-parity between the parties, which makes our politics highly uncertain. In addition, Klein says, national politics have moved away from a focus on "economic" issues, and "cultural" battles are now the focus of our political debates and disagreements.
Here is Klein's bottom line analysis, given the "three theories" that he propounds:

If you were looking for a three-sentence summary of American politics in recent years, I think you could do worse than this: The parties are so different that even seismic events don’t change many Americans minds. The parties are so closely matched that even minuscule shifts in the electoral winds can blow the country onto a wildly different course. And even in a time of profound economic dislocation, American politics has become less about which party is good for your wallet and more about whether the cultural changes of the past 50 years delight or dismay you.

In short, the way Klein sees it, everything is unpredictable, and our politics is destined to play itself out in the future in just the way it did in these midterm elections, with high anxiety on all sides, and no certain results.
oooOOOooo
Jamelle Bouie, like Klein, believes that our national politics is "calcified," though he doesn't use that word. 2022, he said, "is yet another cycle in which the overall electoral picture changed less than you might imagine." This is not, Bouie tells us, what usually happens. Quite the opposite. Historically, what is "normal" in the politics of the nation is that one party possesses what Bouie calls political "hegemony."
And that's coming, he says. One of our two major parties is going to achieve "hegemony," and Bouie thinks the most important question is "which party will be ready?" Here's Bouie's summation at the end of his column:

If there’s any period similar to ours, with two evenly matched coalitions, each struggling to attain a lasting victory over the other, it is in the late 19th century, with its sharp partisan polarization, closely contested national elections and astonishingly high turnout. Then, as now, the margins were narrow; then, as now, the fights were fierce; and then, as now, the combination of the two pushed some of the strongest and most ideological partisans to try to rig the game in their favor.

I think we are in for another round — or two or three or four — of close, hard-fought election cycles with no decisive victory or defeat for either party. But something will come; something — whether economic or environmental or constitutional — will shock the system and give one coalition or the other the chance to expand and attempt to win hegemony over the political system. The question in my mind is which forces in this country are best organized, either for good or for ill, to take advantage when that something eventually hits.

I do not write for The New York Times, but I do, nonetheless, have my own views about these topics. Both Klein and Bouie make very good points - at least I think so - but here is what I'd add, or maybe emphasize. The "shock to the system" that Bouie is predicting - the kind of shock that can lead to a restructuring of our "calcified" politics - does not have to be some kind of external event that shakes things up, starting from the outside in.
We can shake things up ourselves, working from the inside out. And that is exactly what we need to do. We can't afford to wait around for "two or three or four election cycles," until some external event breaks through the political petrification that afflicts us.
Grab your political defibrillator! Let's shock ourselves back to life. The time to apply that shock to the political body politic - and we can do it ourselves - is not two, or three, or four election cycles in the future.
It's right now!
To Subscribe Just Click This Link
Image Credits:
(1) - https://www.nytimes.com/newsletters/jamellebouie
(2) -  https://twitter.com/ezraklein