The image above depicts a possible future for areas within a proposed "expanded downtown" in the City of Santa Cruz. These buildings would be located, if the current City Council has its way, in an area immediately adjacent to the San Lorenzo River levy, right near where Broadway/Laurel intersects with Front Street.
Here's how the City Planning Department describes this image:

City planners have created three development scenarios, all of which correspond to very tall buildings being built along the San Lorenzo River. Maximum building heights would reach either 145-feet, 185-feet, or 225-feet under the scenarios put forward by staff. Renderings generated for "Scenario 3" show buildings between 17 and 20 stories tall.

This "skyscraper proposal" (which was rejected by the City Planning Commission, by the way) was APPROVED by the Santa Cruz City Council - with Council Members Justin Cummings and Sandy Brown voting "No."
The proposed seventeen-story tower, or towers, are far taller than any building in the current downtown - or anywhere else in the city, for that matter. These towers would be almost twice as tall as the ten-story Dream Inn, which is pictured below. I think that this picture of the Dream Inn can give us all an idea of just how gigantic those 17-story towers would be, in what is now a neighborhood mainly comprised of one or two-story buildings. 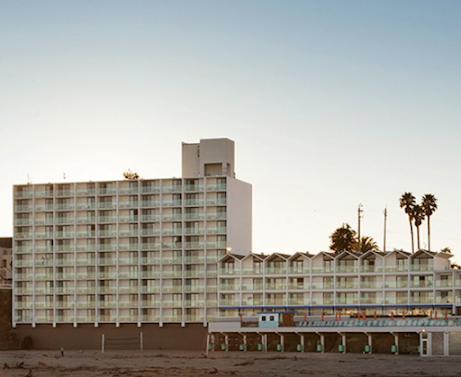 I have noted before, in my blog posting on October 20th, that the City Council vote on this skyscraper proposal is a good way to distinguish between the candidates running for Third District County Supervisor. The candidate whom I have endorsed, Justin Cummings, was a "No" vote on the skyscraper plan. Shebreh Kalantari-Johnson, his opponent in the current supervisorial election, was a "Yes" vote.
For me, of course, the future of our city ought to be determined by ALL OF US, and so far, this proposal for a "Downtown Expansion Plan," including the 17-story skyscraper idea, comes out of closed door dealings between the City's Planning Director, the City Manager, the City's Economic Development Director, and wealthy property owners and developers based in Santa Cruz, which include both the Seaside Company and Ow Commercial. The billionaire owners of the Golden State Warriors also appear to be involved in this plan, since it includes a new basketball arena.
You might think that the wealthy property owners whose land values would skyrocket if the "skyscraper plan" is ultimately approved would be able to pay for the required planning procedures. However, public funds are being used to prepare and promote this development scheme. This plan for the skyscrapers is the city's gift to the developers (ratified by an official City Council vote)!
Again, what happens in our city really should be determined by ALL OF US. That means, if we do care about what happens, that we need to get informed, and get involved, and participate! An environmental impact review process is just now getting underway, and it's what happens AFTER the public gets involved that will determine whether or not this skyscraper caper moves forward.
And let's not forget that the public, ultimately, can use the initiative power to set the rules that the public believes are best!
Here's a reference, right out of the California Constitution [Article 2, Section 11 (a)] to make clear that these initiative powers are fundamental to our system of democratic government:

Initiative and referendum powers may be exercised by the electors of each city or county....

That initiative power is in our State Constitution, and it can't be taken away from us.
In 1973, I wrote a City of Santa Cruz initiative measure that stopped another city-sponsored development project (the proposed development of a massive Convention Center, shopping center, high-rise hotel, and luxury condominium complex on Lighthouse Field - along with seven acres of blacktopped parking, too). That initiative measure was approved by the voters in June 1974, and the passage of that initiative changed the course of history in both the City and in the County.
It is good to remind our elected officials (and ourselves) that we are ultimately in charge of what happens. We are ultimately in charge of what kind of land use and development we will permit.
If the system were working properly, the City Council would not approve a plan for massive new skyscrapers without being quite sure, in advance, that this is what the community wants. Good old fashioned politics, in which the public does make its elected officials do what the community wants, can still prevail.
But if the City Council doesn't pay attention (and I don't think it is paying attention, right at the moment), then the community can "Stop The Skyscrapers" by qualifying an initiative measure - and then passing it. That is definitely one option. The initiative is always available as a mechanism by which we can demonstrate that we do have a system of self-government, as long as we are willing to get involved ourselves!
To Subscribe Just Click This Link
Image Credit:
https://www.indybay.org/newsitems/2022/06/12/18850417.php