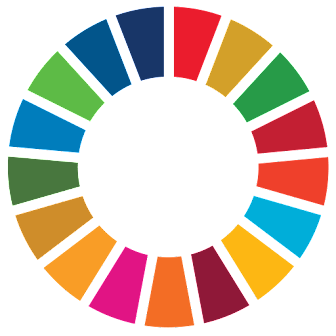 TOKYO — A few years ago, a colorful new accessory suddenly began to appear on the lapels of dark-suited salarymen across Japan: a small badge, shaped like a roulette wheel and divided into 17 rainbow-colored sections.

Almost every day, I find out something new from reading The New York Times. For instance, I now know something about that "colorful little wheel," pictured above, that is "showing up everywhere in Japan."
The quotation I have featured, at the top of this blog posting, is from an article in The Times headlined, "Why Is A Color Wheel Suddenly Showing Up Everywhere in Japan?" That is the hard copy version of the headline. You are invited to use the link to click through to the online version of the article - where the headline is similar, but a little bit different.
As it turns out, this little color wheel is the symbol of the United Nations' campaign for "sustainable development." The U.N.'s so-called "sustainable development goals," (or S.D.G.s), have been embraced by the Japanese, which means that the pictured symbol is now "displayed in hip boutiques, at children's playgrounds and on the websites of Buddhist temples." The seventeen goals cover virtually everything that makes human life worthwhile - "clean water and sanitation" and "zero hunger," for instance. "Climate action" is another.
The "sustainable development" symbol is virtually unknown in our country, as The Times makes clear: "In the United States, when people have heard of the development goals at all, it is often from right-wing media portraying them as part of a radical socialist plot." In Japan, on the other hand, which The Times suggests is perhaps a less cynical society, people have "coalesced around the goals as a feel-good, and in theory do-good endeavor."
"In theory" may be the operative expression, according to The Times. While the symbol is virtually omnipresent in Japan, performance in achieving the S.D.G.s is not commensurate with the penetration and proliferation of the symbol throughout Japanese society.
Read the article for the details, but isn't it often true that our proclamations of allegiance to a goal or objective is dissociated from actual progress towards the goal? This seems to be what is happening in Japan, and given that, we should perhaps question whether it would make sense to try to establish the color wheel fad in the United States. Perhaps we would be better off just to avoid any "symbolic gesture" towards "sustainable development" in the first place.
The Times' article ends by quoting a travel company manager in Japan who rejects that thought. Masaru Ihara says that "as more and more people learn about the development goals, the pin will move from a fad to a symbol of real change. It's creating an atmosphere," he says, "where people feel they have to do something."
I am less certain than Ihara that we can justifiably pin our hopes about achieving the U.N.'s so-called "sustainable development" goals to the color wheel that is proliferating on websites and lapels around Japan, though I admit that is a hopeful thought. In fact, however, not only are "symbolic gestures" not what we need, the whole idea of "sustainable" development is likely an oxymoron, perhaps particularly with respect to that "Climate Action" goal.
Clearly, to my mind, we do need to "do something," here in the United States, to signal to ourselves that we need to "do something" about the climate catastrophe that is resulting from our ongoing emission of greenhouse gasses. "Doing something" is definitely required. In fact, doing "everything" is what we need to do, when it comes to taking actions that can reduce the emission of greenhouse gases. If there is something that we can do to reduce greenhouse gas emissions, then that is something that we must do.
I would love to see a proliferation of little color wheels, everywhere in our country, if it were true that the little color wheels could signal not just aspiration, but achievement. But if genuine achievement is the objective, we would need to get clear about what those "Sustainable Development Goals" are really all about.
I am afraid that the idea of "sustainable development" is a proclamation that we should be aiming to do "more with less." That sounds pretty good (it's win-win!), but that isn't a goal that "speaks to our condition," as the Quakers might say.
At least where global warming is at issue, what we really need is to do is "less."
Period!
To Subscribe Just Click This Link
Image Credit:
https://www.google.com/search?client=firefox-b-1-d&q=united+nations+sustainable+development+goals+logo#imgrc=W7KQQbUI5gGZ-M