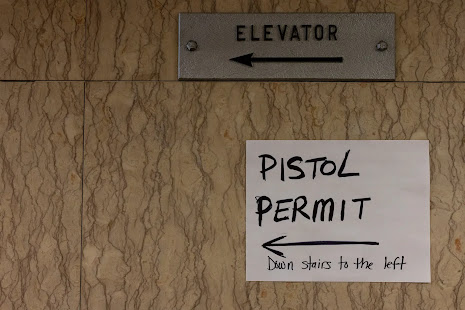 I was struck by a picture published in the September 1, 2022, hard copy edition of The New York Times. I am NOT talking about the picture you see above. The story I read in that edition of The Times reported that large numbers of New York state residents had thronged the offices of various county clerks, throughout the state, as these residents sought to avoid "hours of training and paperwork required by a new gun law," which was set to go into effect on September 1st:

By the time the Niagara County Courthouse opened on Wednesday morning, 150 people were lined up to apply for permits that would let them carry concealed handguns in public. Nearly 100 had camped out overnight, some staying awake in folding chairs and taking regular walks to keep warm.

The crowd represented an impulse that has become visible in much of New York as hundreds attempt to avoid hours of training and paperwork required by a new gun law, many provisions of which go into effect on Thursday.

The state passed the measure in an effort to continue closely regulating weapons after the U.S. Supreme Court in June struck down a century-old law that had strictly limited carrying handguns in public, holding that citizens have a broad right to self protection outside the home.

Since then, New York City has seen a 54 percent increase in concealed-carry permit applications. Oswego County assigned two additional employees to process permits full time. Niagara courthouse officials, who had to divide Wednesday’s crowd into three lines, have handled 150 applications every day this week. And a certified firearms trainer in Suffolk County said that he was fielding as many as 50 phone calls a day from people eager for permits.

Here is one of the pictures that was published in the online version of the story, which is headlined, "As New York’s Gun Law Goes Into Effect, Demand for Permits Spikes." The hard copy version of the headline was slightly different, but not much, just a bit shorter: "New York Gun Permits Spike Ahead of New Law." 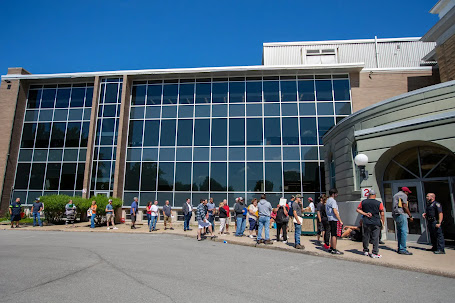 If you can penetrate The Times' paywall, to read the online version of the gun permit story, you will see a number of pictures, including the one immediately above, and the one at the top of this blog posting. What you will NOT see, though, is the picture published in the hard copy version of the September 1st article - the picture that so powerfully grabbed my attention that it launched me from my front room couch to my office computer, to document my concern about what that photo depicted.
Where is the picture that was published in the hard copy version of The Times - the one that so strongly captured my attention? Nowhere! Online, it doesn't seem to exist. At least, I couldn't find it, and I have searched.
I intended to copy the picture that grabbed my attention at the top of my blog, to let those reading this blog posting know what I was so concerned about. Can't do it. While there are lots of photos that document the events that The Times wrote about in the gun permit article, the picture that grabbed me, by photographer Benjamin Cleeton, seems to have been suppressed.
Can I describe this picture? I can try. The photo, in black and white, depicts "a line at the Oswego County Clerk's Office on Wednesday, where two additional employees were assigned to process permits." That quote is the photo caption. What the picture showed was a bunch of people in the line, but right at the center of attention was a young mother, back to the camera, speaking to two children (presumably hers) who were both facing towards the camera, and who beamed up at the mother with attentive smiles.
Had this family waited overnight? Not clear. But what was clear to me was that this mother was letting her children know how important guns are. The girl was maybe ten years old, and the little boy was maybe seven. The mother had gone to a lot of trouble to get a permit that would allow her to buy a pistol, and to bring it into her home. All that trouble so she wouldn't need to do any training or "paperwork." The children would undoubtedly know (or learn) where that gun was located, once it was purchased and brought home. They'd be interested, since they had been part of the adventure of making it possible for their mother to have that gun at all.
I really thought, as I saw that picture - I immediately thought - doesn't this mother know what she is doing? There is a real chance, now, that this cute little boy (or girl) will seek out that gun, sometime, just to touch it, just to feel its power, and that may result in that little boy, or girl, or some playmate, or the mother, or the children's father, or someone else, being killed by that gun - the gun that the mother is so clearly anxious to acquire, making clear to her children how important it is to have that gun.
Where did that picture go?
When we bring guns into our homes, we need to "get the picture." Guns don't belong where children can get them, and children shouldn't be taught that getting a gun is a wonderful accomplishment. War and guns are not healthy for children and other living things. When children get guns that is a bad sign for the future: 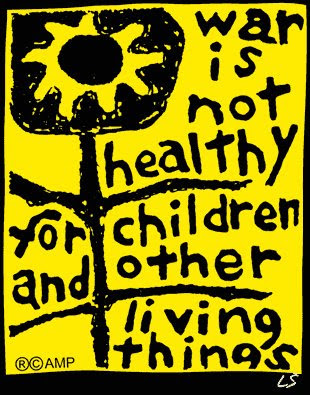