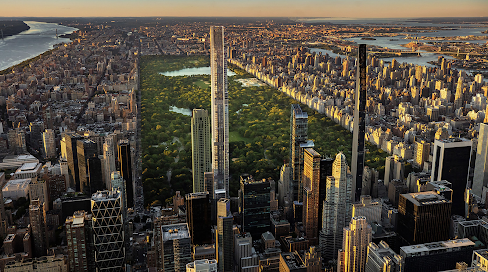 On Friday, September 16, 2022, the "Mansion" section of The Wall Street Journal addressed this issue: "What kind of home can you get for a quarter billion dollars?" Paywalls permitting (and they might not), I invite you to read this article as a way to find out. In the hard copy version, the article is headlined, "Can the World's Tallest Condo Tower Deliver America's Priciest Home?" Online, you'll find the article headlined as follows: "Will Someone Pay $250 Million to Live Atop the World’s Tallest Condo Tower? The Developer Thinks So."
As I have disclosed in an earlier blog posting, this is not the first time that I have read (and reacted to) the "Mansion" section of The Wall Street Journal. In my past blog posting, I commented on an article that described a property being offered for sale by business magnate Larry Ellison. That property was located in North Palm Beach, Florida, and was available for a price of $145 million. While that sounds like a bargain, compared to this New York City condo, Ellison's North Palm Beach estate was, apparently, considered a "tear down," though it looked pretty nice in the pictures. The New York City condo tower is spanking brand new. No additional expenses need be considered (beyond that $250 million purchase price, of course).
In my earlier discussion, I used the article in "Mansion" as the basis for my assertion that we need to do something about the massive income inequality that is so obvious in the United States of America today. The same point is still pertinent, as we read the more recent article about the $250 million condo tower on "Billionaires' Row," but the following excerpt from this more recent article has sparked an additional thought.
Here's the excerpt:

The nine-figure club is a special club, and that club is also now looking to own nine-figure real estate,” said listing agent Ryan Serhant. “It’s a new paradigm now. The uber-wealthy are looking for places to diversify assets, and real estate has become one of the most popular and sought after mega-assets. The levels have exploded (emphasis added).

Your father was right about a few things, and one of them is the timeless value of real estate.

For starters, the utility of houses as pure investments has never been more obvious. U.S. home values have risen 36% since 2020—an increase twice as large as any other two-year leap on record. At $440,000, the median house is now worth more than half the cost of an average retirement. Time your downsizing right and security in old age is half won (emphasis added).

Thinking about housing as an "investment," and as a place to "diversify assets," and not as a place to live, is the thing I'd like to highlight. Both of the articles in The Journal make clear that the real estate deals being described are not really so much about the kind of housing that the rich and famous might choose as a place of residence; they are, actually, about using housing (high-end housing in this case) as a kind of investment.
Obviously, seeing your housing choice as a choice about where to invest your money, as opposed to seeing it as a choice about where you'd like to live, is particularly relevant for those with sky-high incomes. The income inequality point that struck me in that first article from "Mansion" is related to the fact that those with huge incomes, and incredible wealth, are using that wealth to "invest" in multiple residential properties, because they think that this will pay off for them over the longer term.
HOUSING IN MY HOME TOWN - THE EMPTY HOMES TAX
How does this distinction between seeing the purchase of a home as an "investment," instead of seeing a home purchase as "selecting a place to live," work out in Santa Cruz, California, my hometown?
First, of course, Santa Cruz is one of the nicest places to live that you could hope to find. The "uber-wealthy" drive up housing prices in my hometown because they actually do want to live here.
But... Santa Cruz real estate is also a "good investment," and "uber-wealthy" individuals (and there are lots of them in the Silicon Valley, about thirty miles "over the hill"), are also buying homes and land in Santa Cruz for "investment purposes." They are buying homes they don't intend to occupy as their principal residence, and once they have bought them they then keep them empty.
The fact that this is true, and that perfectly functional homes are now left "empty" most of the year, has led to a ballot measure on the Santa Cruz City ballot this November. For those not familiar with it, you can get a copy of Measure N (The "Empty Homes Tax") by clicking this link.
The idea behind Measure N is that when the "uber-wealthy" start buying up our local homes as an "investment," instead of buying homes as a place in which they actually plan to live, that increases home prices, and rental prices, rather significantly, and so those owners who choose to keep their homes empty should at least help to offset the damage to the community by paying a very significant tax, each year, for keeping those homes "empty."
HOUSING IN MY HOME TOWN - LONG-TERM SOLUTIONS
When housing prices are set by the "market," those with the most money will be able to rent or purchase homes that those with less money will not be able to afford. In fact, demand for housing in Santa Cruz is so great that the prices paid to buy, and the prices paid to rent, are skyrocketing. Ordinary-income people (just your typical teacher, store clerk, police officer, house painter, college student, etc.) can no longer afford to live in the community. This is an obvious, and critical problem, and there is probably no local issue of more importance.
Given this situation, there is a lot of feeling that the community should "build its way out of the housing crisis." The thought is this: Since the lack of supply of housing drives prices up (for either purchase or rental), we should build more, and the price will come down. This is supposed to work because of the so-called "law of supply and demand."
Unfortunately, of course, the "supply" of housing is inherently limited, and the "demand" for housing in Santa Cruz is inherently unlimited. This is particularly true because housing is, more and more, being purchased by "investors," rather than by those who live and work in the community and want a place to live. See above. Are there actual solutions?
The answer is "Yes," but they are not "market-based" solutions, and they can't be achieved by local action alone. Here are a few real solutions:
The above, of course, is only a very "partial list." The basic requirement to address our housing crisis, however, is pretty clear. The "secret" to making affordable housing available is to detach housing prices from the "private (investment) market," which will always provide scarce goods to those with the most money.
In a society in which massive income and wealth disparities not only exist, but "persist," it is important to make clear that housing is a basic need of everyone. If that is, in fact, the case - and it is - then our laws need to establish a system in which ordinary income persons (your typical teacher, store clerk, police officer, house painter, college student, etc.) will either be directly provided with housing, or can purchase or rent, housing that they can afford. With all due respect to The Wall Street Journal, housing should not be an investment vehicle for the "uber-wealthy."
If that's the way we feel about it (and I think a lot of us do), we need to change the current legal rules to do what that Star Trek guy used to say: "Make It So."
To Subscribe Just Click This Link
Image Credit:
https://www.wsj.com/articles/central-park-tower-penthouse-lists-for-250-million-11663202931