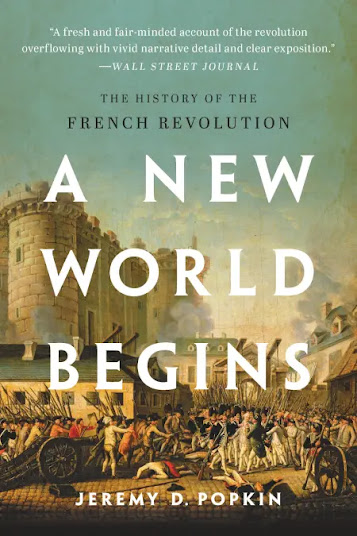 I picked up my copy of A New World Begins, authored by Jeremy Popkin, from one of the many "little free libraries" that I visit as I walk around Santa Cruz, California. If you want to read this book yourself (and particularly if you like to underline your books, as I do, so you can't just take the book out from the library), you may have to buy it at a bookstore. Popkin's book is long, at 561 pages before the Acknowledgments and the Index, and I thought it was quite a rewarding read.
Before I picked up the book and took it home with me, I more or less credited myself with knowing pretty much anything worth knowing about the French Revolution. After all, I was a history major in college, and I spent six months in France as an undergraduate student. I took a course touching on French history from Gavin Langmuir, a famous historian who taught at Stanford, and I have a book by Robert Fawtier on my bookshelves - The Capetian Kings of France. Besides, I read A Tale of Two Cities long ago, not to mention On Revolution, in which Hannah Arendt gives her take on the French Revolution. What more could you need?
Nonetheless, since the book was essentially brand new, and since I am a history student, I picked up the book and took it home. As it turns out, I didn't know that much about the French Revolution.
Reading Popkin's book made me think, a lot, about the state of our own government, society, economy, and politics, here in the United States. Contemplate this discussion, from Page 497 in Popkin's book:

Where it faced defeat, the Directory told its supporters to claim that legal procedures were being violated; they were then to create a schism by walking out of the electoral assemblies and forming their own rival group. Even when the breakaway assembly had many fewer participants than the original one, the government's loyalists in the councils would pronounce its candidates legally elected.

Does that ring a bell? Does the date, January 6, 2021, come to mind?
William Faulkner is famously known to have said, “The past is never dead. It's not even past.”
Pick up Popkin's book, and read all about it!
To Subscribe Just Click This Link
Image Credit:
https://www.basicbooks.com/titles/jeremy-popkin/a-new-world-begins/9780465096671/