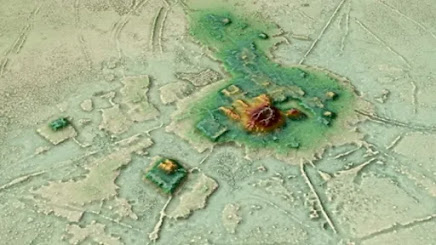 I was interested by an article in a recent edition of the online magazine, Vice. The article was titled, "‘Mind-Blowing’ Lost City With a Cosmic Link Discovered in the Amazon." Clicking that link will take you to the article, which begins as follows:

The ruins of a vast ancient civilization that has remained hidden under the densely forested landscape of the Bolivian Amazon for centuries has now been mapped out in unprecedented detail by lasers shot from a helicopter.... While field expeditions and Indigenous knowledge have previously shed light on this region’s lost settlements, a remote-sensing technique called Light Detection and Ranging (LIDAR) has now exposed the enormous extent and tantalizing complexity of this civilization.

The study reported on by Vice documents "immense settlements [that] stretch across some 80 square miles of the Llanos de Mojos region of Bolivia and include pyramids, causeways, canals, ramparts, elevated forest islands. The structures were built by the Casarabe culture, an Indigenous population that flourished from 500 to 1400 A.D. and came to inhabit some 1,700 square miles of the Amazon rainforest." The find is “mind blowing,” according to Heiko Prümers, an archaeologist at the German Archaeological Institute, headquartered in Berlin, and one member of the research team.
As I read this story, I marveled that a civilization that still existed in 1400, only 622 years ago, had disappeared so completely from human recollection. 622 years is what I think of as a relatively short period of time, in the overall sweep of human history. That a civilization of "enormous extent and tantalizing complexity" could simply disappear seems strange to me. Does that seem strange to you, as well? Despite the extent and complexity of this civilization, no definite human memory of it existed, some six hundred years after it was, apparently, flourishing.
That makes me think. Who will marvel at the enormous extent and tantalizing complexity of our own civilization, should it, too, disappear?
And of course, it might.
Most of us wouldn't think that our civilization could disappear - as large and complex as it is - but the Amazonian civilization so recently uncovered should make us realize that our own civilization might come to the same kind of end. What a "mind blowing" wonder our world would seem to anyone who came later - after our world had disappeared  - and who found buried evidences of what we had built.
Memento Mori is not only good advice for the individual. We humans who are alive today would do well to recognize the possibility that what we assume is fixed, stationary, and inevitable might disappear, despite its vast extent and amazing complexity.
With that thought in mind, we might focus more on what we need to do to make sure that our civilization does not become a tantalizing archeological question for others, in the future.
As, of course, it might.
To Subscribe Just Click This Link
Image Credit:
https://www.vice.com/en/article/3abxv5/mind-blowing-lost-city-with-a-cosmic-link-discovered-in-the-amazon