God knows it’s a struggle
God knows it’s a crime
God knows there’s gonna be no more water
But fire next time
- Bob Dylan
God Knows
According to The Los Angeles Times (and despite the many wildfires now raging worldwide), Bob Dylan's confident prediction (above) may not really be correct. Looking ahead, Dylan can hear the adumbrations of the trumpets of doom that many (not only Dylan) believe we can all discern, if we would only pay attention.
Global warming is definitely at the stage "When Shit Gets Real." Pictures of wildfires adorn our newspapers, online and in their hard copy versions, for those who still like the inky reality of newsprint smeared across their fingertips. For those who get their news in some sort of video format - and many of us do - we can easily watch the coverage that seems to vindicate what Bob Dylan has to say. There are massive wildfires everywhere, all around the world, and certainly including California.
The possibility of massive flooding events, however, is certainly part of that "When Shit Gets Real" perspective. Even as we read reports of wildfires, we hear about both floods and droughts. Again, that's a worldwide phenomenon. The recent, and massive, inundation of Pakistan is certainly an example.
With respect to California, the article in the August 12, 2022, edition of The Los Angeles Times may or may not be accessible to non-subscribers, given the newspaper's paywall. Here, however, is an extract from the article, titled, "Risk of catastrophic California ‘megaflood’ has doubled due to global warming, researchers say."

On 10,000-foot peaks, which would still be somewhat below freezing despite global warming, “you get 20-foot-plus snow accumulations,” Swain said. “But once you get down to South Lake Tahoe level and lower in elevation, it’s all rain.”

Swain and co-author Xingying Huang project that end-of-the-century storms will generate 200% to 400% more runoff in the Sierra Nevada Mountains due to increased precipitation and more precipitation falling as rain, not snow.

The increased runoff could unleash massive landslides and debris flows, particularly in hilly and mountainous areas stripped of vegetation by wildfires.

The study also found that further increases in “megaflood” risk are likely with each additional degree of global warming this century.

The ARKStorm is also known as “the other Big One” after the nickname of an expected major earthquake along the San Andreas Fault.

But unlike an earthquake, an ARKStorm event would result in a disaster zone stretched across thousands of square miles, complicating emergency response efforts and triggering economic and supply chain blockages that would be felt globally.

The researchers are now working collaboratively with the California Department of Water Resources to develop maps pinpointing where flooding could be worst and preparedness strategies to reduce potential losses of lives and property.

Some of their initial proposals, however, are all but certain to generate tensions between flood risk management plans and water conservation projects.

More frequent cycles of droughts and deluges fueled by atmospheric rivers — Pacific-based storms that are hundreds of miles wide — will present both problems and opportunities for West Coast reservoir managers balancing mandates for water storage and flood control, said Alexander Gershunov, a climate scientist at the Scripps Institution for Oceanography in San Diego who is not affiliated with the study.

That’s because, he said, “California will increasingly have to depend on potentially hazardous atmospheric rivers and floodwater for water resource generation in a warming climate.”

Preparing for massive flooding, the UCLA study says, “could mean letting water out of reservoirs preemptively, allowing water to inundate floodplains and diverting water away from population centers.”

Earlier this week, however, Gov. Gavin Newsom called on state agencies to begin preparing for a hotter, drier future with strategies including expansion of water storage and water recycling capacity.

That’s because, he said, new data indicates that California will lose 10% of its water supply by 2040.

“Retaining as much water as we can is a good move,” Swain said, “except that might collide with the necessity to prepare for catastrophic flooding.”

Currently, people are focused on the risk of wildfires, plagues and earthquakes, Swain said. “But catastrophic flooding is a risk that has been rising quietly, but steadily in the background.”

“Eventually, it’s going to come back to bite us,” he said.

Meanwhile, let's not forget about events in Pakistan, where we were informed on August 30th, about a month ago, that "a third of Pakistan is underwater as deadly floods leave desperate residents facing 'doomsday.'" 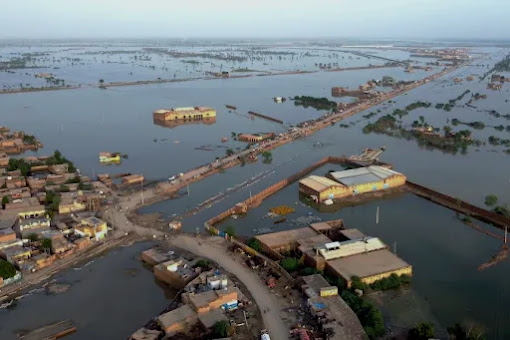 oooOOOooo
So, what is our takeaway, here?
Let's go back to that "When Shit Gets Real" understanding of our situation. We are in for it, all over the world. What California can be looking forward to, by way of the predicted megaflood disaster, is massive flooding which could displace "up to 10 million people," shut down "major interstate freeways such as Interstates 5 and 80 ... for months," and "submerge population centers including Stockton, Fresno and parts of Los Angeles." This megaflood, if it happens, would constitute a "$1-trillion disaster, larger than any in world history."
So, we can start trying to prepare for these impacts, even as we also try to prepare for impacts related to increasing wildfire danger, drought, food insecurity, and massive heat prostration.
By all means! But Benjamin Franklin's advice is still our best bet. You'll remember his adage, I am sure: "An ounce of prevention is worth a pound of cure."
What we need to do, urgently, is to take action both individually and collectively to try to prevent the disasters we can so easily foretell.  We can do that only by taking action, as soon as we possibly can, to eliminate every source of greenhouse gases that we possibly can.
Prepare to deal with the impacts of predicted disasters? Sure! But let's try to prevent the worst of it, at least.
There's a lot more that that we could do on the prevention side - and we had better get ourselves organized to do it.
To Subscribe Just Click This Link
Image Credits:
(1) - https://www.latimes.com/environment/story/2022-08-12/risk-of-catastrophic-megaflood-has-doubled-for-california?utm_id=64109&sfmc_id=713668
(2) - https://www.nbcnews.com/news/world/pakistan-floods-un-appeal-aid-monsoon-climate-change-rcna45219