I live in Santa Cruz, California, on what is known as the "Eastside." On August 12, 2022, there was a fire in the nearby DeLaveaga Park area, which is adjacent to a residential neighborhood called "Prospect Heights." DeLaveaga Park and Prospect Heights are located just across Highway One from where I live.
The recent fire was of significant concern to Eastside residents (and I am sure to Prospect Heights residents, even more). Where I live, we saw helicopters passing over our heads, repeatedly, at about five-minutes intervals during the early afternoon, as these helicopters journeyed from DeLaveaga Park to the San Lorenzo River, and back, picking up loads of water to fight the fire.
Those who have been paying attention to fire dangers (and that includes most of us, nowadays) realize that DeLaveaga Park is particularly susceptible to fire. A firestorm in the Oakland Hills, in 1991, in somewhat similar terrain, killed twenty-five people, and injured 150 others, and destroyed one house every eleven seconds, at its peak.

Quoting from an article in a 2018 edition of Good Times, Santa Cruz:

Even twenty-five years ago, Santa Cruz fire officials were worried about the Prospect Heights neighborhood that adjoins the overgrown eucalyptus stands in DeLaveaga Park. In a newspaper article at the time, then-Fire Chief Ron Prince expressed concern that brush, downed trees and fallen limbs were four feet deep in some areas. In the parlance of veteran firefighters, these accumulations of downed vegetation are called "fuel," and they help a small ground fire crown into the treetops when the worst conditions align. A walk throug­­h the forest there today reveals it is still just as fuel-rich.

While there is some good news in what Prospect Heights residents are doing to be "firewise," I think that the conditions described above are more or less still with us, and if there were an offshore wind, coupled with big fire in the DeLaveaga Park/Prospect Heights area, the entire Eastside could be burned to nothing in much the way that homes were consumed, every eleven seconds, during the Oakland Hills firestorm.
Luckily, the recent fire in DeLaveaga Park was pretty quickly extinguished. But there was great interest, naturally, in knowing how it had started. In the immediate aftermath, local fire officials couldn't provide a definitive answer. Concerned residents had to wait to learn what had caused the fire.
On August 27, 2022, readers of the Santa Cruz Sentinel thought they would finally have an answer. That's what I thought, at least, as I saw the headline featured at the top of this blog posting: "Final cause of DeLaveaga wildland fire is released."
The news story, itself, was a thundering anticlimax. The "final cause," which the headline proclaimed was to be revealed by the article, was said to be "undetermined."
Here is my unsolicited advice for headline writers everywhere (and particularly in Santa Cruz, California): Don't promise something in the headline that you aren't going to deliver in the story! If you are writing a story about a recent fire, and if you don't know the final cause of the fire (because it is undetermined) then don't let the headline make you a liar. A headline that reveals what you actually know would have been appreciated: "Final cause of DeLaveaga wildland fire is undetermined."
Would that be too much to ask? Not the way I see it! 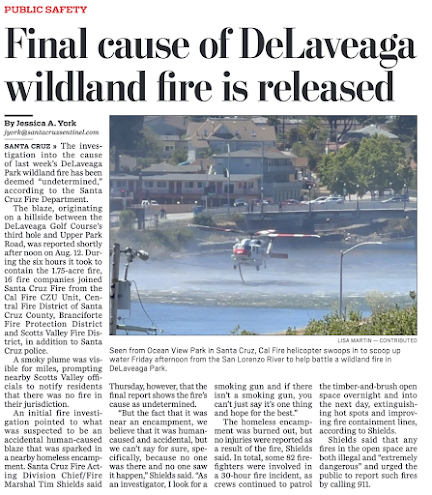