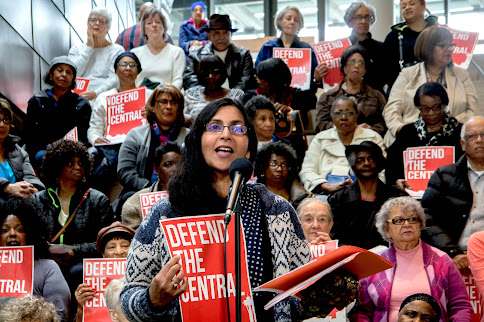 Yesterday, my blog posting suggested that we could improve our politics, economy, and society by getting rid of those "different rules for the rich guys." I am not the only one who has had that thought.
Here, for example, is a link to an item by Chris Hedges, as featured in Consortium News. Hedges is a journalist (and a Presbyterian minister), and his article provides some ideas on "how to defeat the billionaire class."
What does Hedges suggest?
Well, Hedges suggests that local government is a good place to start making the needed changes. He points, specifically, to what is happening in Seattle, Washington.
Having served as a local government official for twenty years - and having been involved in some successful efforts that made some pretty major changes in Santa Cruz County - I want to say that I believe that Hedges is on to something. In fact, local officials are our most "powerful" governmental officials, since it usually only takes a rather small number of them to do whatever the local government can do.
Local governments can do a lot, too, since the basic power of any local government is to provide for the health, safety, welfare, and morals of the local community. In Santa Cruz County, we did it with just three votes! You needed four votes at the Santa Cruz City Council. Three or four is an attainable number. The odds aren't nearly as good at the state level, where if you want to change the law you need at least forty-one votes in the Assembly, and twenty-one votes in the State Senate, plus the approval of the Governor. The odds are really bad at the federal level!
Hedges also has another very good piece of advice. He quotes Seattle City Council Member Kshama Sawant as follows:

Campaigns need to be organized around demands, not around personality politics.

The way to run a strong electoral campaign is to completely reject personality politics, completely reject careerism, and build political organizations like Socialist Alternative. Except we need far bigger organizations where we can hold our elected representatives and other leaders in the organization accountable in the program of demands that we are fighting around. This becomes the central focus, not those individuals who could then use those positions to build their own careers by making themselves useful to the ruling class. That’s what we need to reject.

Building political power by "organizing around demands," and starting at the local government level, is a good prescription for achieving significant, fundamental change. Those precepts are a couple of good first steps towards making the billionaire class subject to democracy, as opposed to the largely prevailing current situation, in which democracy is subject to the billionaire class!
To Subscribe Just Click This Link
Image Credit:
https://consortiumnews.com/2022/05/31/chris-hedges-how-to-defeat-the-billionaire-class/