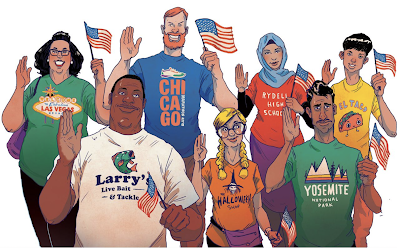 In an article in the April 16-17, 2022, edition of The Wall Street Journal, Yascha Mounk talks about "diverse democracies." What Mounk is talking about, in using that term, is societies that are attempting to maintain democratic governmental systems, despite the fact that the society is characterized by significant ethnic or religious differences. Mounk thinks that this is a challenge, and that there is a problem upholding a commitment to "democracy" when "diversity" is the rule. As he frames his concern, "Do the citizens of deeply diverse countries like the United States even have enough in common to sustain a meaningful form of collective solidarity?"
The United States, as we all know, is a "Nation of Immigrants." Americans have no ethnic "common descent" to keep us together, and there is no common heritage or belief system that helps keep our society together, either. That poses a challenge to democratic government, the way Mounk sees it.
Mounk advertises himself as "one of the world's leading experts on the crisis of liberal democracy and the rise of populism," and he has written a book entitled, The Great Experiment: Why Diverse Democracies Fall Apart and How They Can Endure. Mounk's prescription? "Everyday Patriotism." His Wall Street Journal article, in fact, is titled, "The Everyday Patriotism of Diverse Democracies."
Here is how Mounk outlines his "Everyday Patriotism" argument:

In the most despairing months of World War II, when the planes of the Wehrmacht were raining bombs upon London, and the Nazis seemed destined to rule vast swaths of Europe, George Orwell set out to write about a surprising subject: the virtues of patriotism.

Orwell was as aware of the destructive potential of nationalism as any of his compatriots ...

But it is precisely because Orwell knew how powerfully such emotions drive politics, and how destructive they can become when they are allowed to fester, that he defended a constructive form of patriotism. “What has kept England on its feet during the past year?” he asked. In the main, he answered, it was “the atavistic emotion of patriotism.”

Orwell’s ambivalent case for patriotism is of renewed relevance today. When cruise missiles first homed in on their targets in Kyiv, much of the world assumed that Russian troops would soon reach the Ukrainian capital. But to the astonishment of both Western intelligence analysts and the war’s architects in the Kremlin, Ukraine has so far managed to resist. Fueled by a collective determination to defend their homeland, however poor the odds, Ukrainian soldiers and civilians have been able to withstand brutal attacks by a much larger invading force.

So how can defenders of democracy summon the power of patriotism without opening the door to prejudice and chauvinism? ...

Forever hailing the achievements of one part of the population, ethnic nationalism doesn’t acknowledge the extent to which immigrants and their descendants shape most countries.

The most traditional form of nationalism emphasizes common descent. Advocates of an ethnic conception of patriotism argue that most nations are rooted in the history of particular peoples and should continue to recognize those who descend from its original inhabitants as having special standing.

But the changes of the past half-century, especially in democracies that experienced a high level of immigration, have made such an ethnic conception of nationalism impractical and destructive. Forever hailing the achievements of one part of the population, ethnic nationalism is unable to acknowledge to what extent most countries are now shaped by immigrants and their descendants. It fails to give members of modern democracies who belong to minority groups full credit for their contributions, making it far more difficult to sustain genuine solidarity in countries undergoing rapid demographic change.

Philosophers and politicians who recognize that ethnic nationalism cannot provide a sensible basis for a diverse democracy, but don’t want to give up on patriotism altogether, usually make the case for a time-tested alternative: civic patriotism. To be proud to be an American, they say, is to love the ideals and institutions to which the country committed itself in the Declaration of Independence and the Constitution.

The advantages of civic patriotism are significant. Unlike ethnic nationalism, it allows anybody who is willing to embrace a set of shared political values to become a full member of the community. So long as immigrants from such different places as Morocco, Thailand, Zimbabwe and El Salvador agree to abide by the Constitution, they should be able to live together in peace—and become as American as a White Anglo-Saxon Protestant whose forefathers arrived on these shores hundreds of years ago.

There is also some reason to think that civic patriotism is less likely to draw countries into international conflict than ethnic forms of nationalism. A love of country that is based in a belief in the inherent superiority of one’s own ethnic or racial group provides an easy excuse for those who want to dismiss the legitimate interests of other nations. But a nation that is founded on the importance of self-determination should be able to recognize that other countries also have a legitimate interest in ruling themselves. Civic patriotism should be better able than ethnic nationalism to welcome newcomers into the fold and sustain meaningful international cooperation.

For all of those reasons, the idea of civic patriotism strongly appeals to me. It defines nations by their highest ideals rather than their basest instincts. And it gives citizens a way to take pride in their country without indulging in bigotry or chauvinism. If I didn’t hesitate to swear an oath of citizenship when I became an American citizen five years ago, it is, in part, because I love the Declaration of Independence and the Constitution and the inspiration they have provided for civic patriotism, both at home and abroad.

Even so, I have reluctantly come to the conclusion that civic patriotism is at best a partial answer to the question of how contemporary democracies can sustain a common national identity. Patriotism is one of the most universal sentiments in the modern world. Most citizens of democracies feel it at least to some extent. But an interest in high-flown civic ideals and civic documents remains the preserve of a politically minded minority.

Noble though the idea may be, civic patriotism will never fully describe what most people feel when they think of their country with love or affection. In putting abstract political principles at the center of our collective sentiments, the notion of civic patriotism runs the danger of mischaracterizing a sentiment that is, at least as much, about our emotional attachment to real people and places. We need to complement the civic conception of patriotism with another dimension—one which recognizes the key role played by everyday culture...

When people say that they love their country, they aren’t necessarily celebrating the ethnic links that unite members of the majority group. Nor need they be thinking about politics or the constitution. While politicians might, for lack of better words, invoke a lot of clichés or historical symbols when making patriotic speeches, most people arrive at their cultural patriotism by a more direct and unpretentious route. Their love of country is deeply imbued with their appreciation of its everyday sights and smells and sounds and tastes. Their affection is for the things that make up everyday life: their fields and cities, dishes and customs, buildings and cultural scripts.

There is a way to invoke culture that excludes newcomers and minority groups, that values purity over inclusion. For cultural traditionalists, Italy would cease being Italy if a greater number of Italians chose not to celebrate Christmas, and India would cease being India if most Indians started to celebrate Halloween. But in a diverse democracy, culture bears the mark of many different groups. When asked about their favorite foods, Germans are now more likely to mention a “foreign” dish like spaghetti Bolognese or Döner kebab than they are to go on about a “local” dish like Schweinshaxe. And when Americans think about dishes they love, they are as likely to list pizza and tacos as they are to talk about meat loaf or apple pie (emphasis added).

I don't want to get into a disputation with Mounk, but it strikes me that he is talking about two related, but slightly different things. "Democracy" and "patriotism" can definitely be related - particularly in the real world, as opposed to the world of political theory - but while hot dogs and apple pie are a kind of "patriotic glue," as Mounk argues - and let's follow his lead and throw in tacos, and pizza, and baseball, and football, and basketball, and soccer, as well - it is what Mounk calls "civic patriotism" that I am thinking about when I consider the future of "democracy" in America.
"Everyday Patriotism" is certainly positive, and helps us learn to live together, but far more important for the future of "democracy," I think, is a widely-shared understanding of and commitment to the political principles that define that democracy. Primary among these is the principle that "all persons are created equal," and that this "self-evident" truth about our human situation requires us, both collectively and individually, to be dedicated to the protection of "life, liberty, and the pursuit of happiness" for everyone.
A deep understanding of that idea, and a commitment to that idea, the statement that established the very "purpose of our nation," from the very beginning, is what that gives us our greatest chance to achieve and maintain the "democracy" that we are so properly worried may be slipping away.
Hot dogs, baseball, and apple pie, and all those other "sights and smells and sounds and tastes that make up everyday life," are also really good! They help bring us together out of our human diversity, but as for "democracy," we need a commitment to the political principles, and the political practices, proclaimed in the Declaration of Independence and made operational in the Constitution. These, I believe, are on a different level from "everyday patriotism." It is on that deeper, more profound level, that our democracy will either sink or swim.
POSTSCRIPT:
For more from Yascha Mounk, consider reading "Sticks And Stones: Yascha Mounk On The Erosion Of Good-Faith Discourse In America," an interview in the April 2022 edition of The Sun magazine.
Image Credits:
https://www.wsj.com/articles/the-everyday-patriotism-of-diverse-democracies-11650034319
To Subscribe Just Click This Link