#165 / Curtis Yarvin And A Return To Monarchy 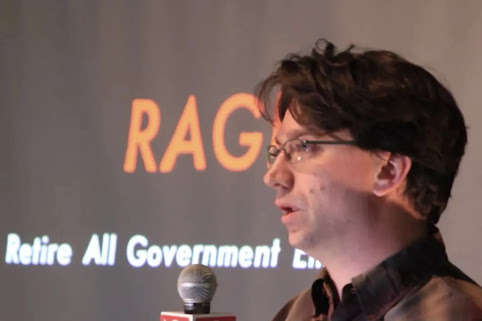 That is Curtis Yarvin in the picture above (more about him momentarily). The "RAG..." you see on the screen behind Yarvin is just a partial rendition of "RAGE."
According to a Vanity Fair article largely focused on Yarvin, authored by James Pogue, "RAGE" is an acronym, promoted by Yarvin. "RAGE" means "Retire All Government Employees."
Yarvin, who seems to position himself as some kind of political philosopher, has a number of "way out there" ideas about contemporary politics in the United States. He rejects democracy, for instance, and suggests that what we need right now is a monarchy. Peter Thiel, the right-wing billionaire, is said to consider Yarvin a profound thinker.
Since I don't hang with the right-wing billionaires, and with the want-to-be billionaires, I had never heard of Yarvin until I read the Vanity Fair article mentioned above. The article was published on April 20, 2022. I was able to read it even though I am not a subscriber.
Here is a little of what Pogue tells us about Yarvin and his ideas:
Having read the above, you might well come to the same conclusion reached by those political reporters mentioned by Pogue, who dismiss Yarvin as a "kook." Before you do that, though, think a bit about Yarvin's claim that "the power of the executive branch has slowly devolved to an oligarchy of the educated who care more about competing for status within the system than they do about America’s national interest."
Lots of people might well find that statement pretty descriptive, and if that state of affairs starts to be intolerable to enough people, some solution will need to be found.
Yarvin's solution is to proclaim that we need a "dictator," someone to become the "CEO" of the United States of America, someone who will operate this country the way a "monarch" would. It is pretty clear to me why Peter Thiel, the billionaire from Silicon Valley, might find this kind of thinking "profound." As Financial Review said, way back in 2015, "in Silicon Valley, the new masters of the universe think they know best."
Since I don't hang out with the billionaires and the right-wing "masters of the universe," I am not drawn to Yarvin's authoritarian solution to what may well be a genuine political problem. I can be persuaded that there is a kind of political/financial/academic/mainstream press "Cathedral" that acts like an oligarchy, and that presumes that it knows what is best for everyone. Ironically, those right-wing "Masters of the Universe," not part of "the Cathedral," while coming from a different political position, have an identical view of their own greatness.
If you want to identify who is who in this scheme to which Yarvin is speaking, Thiel and his right-wing buddies - and that includes the guy who ended up being the 45th President of the United States - are all in the authoritarian, "Monarchy" party. Hillary Clinton, who speaks for the elite that Yarvin calls "The Cathedral," is at the opposite pole, on the "Oligarchy" side. Clinton, you'll remember, found it perfectly proper that she should be able to designate people who are "deplorable" and those who are not.
As noted, in the Vanity Fair article, the elitist "Cathedral" crew was called an "Oligarchy," and the Thiel/Yarvin team was given the "Monarchy" label. When the people of the United States were given a clear choice between the elite oligarchy of "the Cathedral," and the "Monarchy party" (Clinton v. Trump in 2016), the people voted for the "Monarchy party" - for Trump, not Clinton.
But what about a "democracy" option?
If there is a takeaway from the article - and I think there is - the only thing that is likely to beat the "Monarchy" will be "Democracy." Our oligarchical, neoliberal elitists, plausibly called "the Cathedral," aren't going to be able to convince the country that the elitists are actually representatives of a genuine democratic movement. "Oligarchy," actually, is more like it.
If this is true, then that "Democracy" thing is going to be up to us. As I always say (because I think it's true), if we want to have a democratic self-government, we're going to have to get much more involved ourselves. Reading about Curtis Yarvin is just one more demonstration that this is exactly the case.
Image Credit:
https://www.vox.com/policy-and-politics/2017/2/7/14533876/mencius-moldbug-steve-bannon-neoreactionary-curtis-yarvin
To Subscribe Just Click This Link