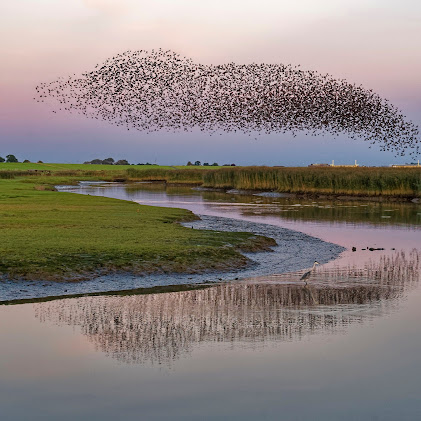 On April 27, 2022, The New York Times ran an article, in its "The World Through A Lens" series. The article was titled, "Transfixed by the Beauty of Starling Murmurations." Written by Søren Solkær, the article reported on Solkær's travels around the world, as he tracked down and photographed these amazing and beautiful natural phenomena. If you are not blocked by a paywall, clicking on that link to The Times' article should let you see some of these murmurations in video, so you, too, can be transfixed.
Solkær explains, among other things, why scientists think that starlings engage in these murmurations: first, to help protect the birds from predators, by a "dilution effect." Second, as a way to help keep the starlings warm in the evenings by recruiting larger roosts. Solkær also commented on something he said was more difficult to explain, which is just how the birds are able to move in such proximity, with their movements so tightly coordinated.
In connection with that discussion, Solkær reported as follows:

Studies have found that each starling responds to six or seven of its nearest neighbors, a number that seems to optimize the balance between the cohesion of the group and the effort of the individual.

In the world of starlings, in other words, just as in our human and "political" world, it appears that small groups are the key to success - the key to ensuring effective collaboration between "individuals," and the totality. We are both "individuals," and part of a much larger whole; we are  "together" in this life. How do we, as individuals, coordinate and work effectively with the group as a whole?
Margaret Mead, the anthropologist, has told us how it works for humans. Søren Solkær has let us know that the same rule works for the starlings!

Never doubt that a small group of thoughtful committed individuals can change the world. In fact, it's the only thing that ever has.