Pictured above is Laurence (Larry) Trimble, an American silent film director, writer and actor who was most widely known for his four films starring Strongheart, "a German Shepherd dog [that Trimble] discovered and trained that became the first major canine film star." As it happens, Trimble was also associated with my father, Philips Patton, and the picture above comes from a Patton family collection.
As you will see if you click this link, my father entered a national contest, in 1930, and won the right to provide one of Strongheart's sons with a home. Actually, I have written about this before, and the link right here provides a readable version of the letter that won the dog.
The picture above, in fact, shows Trimble not with Strongheart, but with Geri, the dog that my father won in that American Boy contest. Very sadly, my Dad was not able to keep the dog for very long. Shortly after Geri arrived in Saint Anthony, Idaho, where my father lived, my father's mother died, and my father had to relocate to San Francisco, where he couldn't keep the dog. He had to give Geri back to Trimble, and kept up a brief correspondence with him.
As the four Patton children grew up, we learned, of course, of my Dad's early literary triumph, and how he won, and then lost, this wonderful and amazing dog. It was a great story, and my father's history has provided other examples of how my father's writing abilities made all the difference in his life. I am around today because of my Dad's ability to write compelling and persuasive prose. I am pretty sure that it was my father's letters to my mother, extending over years, that ultimately convinced her to marry him. I wouldn't be around if he had not been successful!
At any rate, to get to the point of this blog posting, I was always interested (as I think was natural) in why my parents gave me the name, "Gary." There were no other family members, on either side, that had that name, and I would have much preferred to have been named, "Philips," after my Dad. "Philips" is a pretty unusual name (particularly as a first name), and was the maiden name of my father's mother, Clara Olney Philips, whom my Dad adored. Why wasn't I named, "Philips," I wanted to know, and why was I named, "Gary"?
Well, my parents were never very forthcoming about that. My mom, in particular, who always handled the question when asked, uniformly tried to put off any serious response, treating the question as if it didn't matter in the slightest. Why and how I got my first name just wasn't consequential, the way she saw it.  My Mother always responded this way to any effort by me to raise the question: "Well, we just liked the name." My mother would tell me that. Or, "I don't know, Gary, we just loved the name; maybe because of Gary Cooper."
The name of the dog my Dad had won never entered into the discussion about my name, and in fact, the name of the dog never featured in any of the family discussions about my Dad's letter writing triumph, and the sad story of how he had to give the dog back. While I read the article a number of times, as I was growing up, and while I certainly saw that the dog was named "Geri," it never struck me that this name might be pronounced just the way my own name was.
Except..... One time, for some reason (and this was when I was about sixteen or seventeen years old, I think), I went looking for the article, and I couldn't find it, and so I asked my mom if she knew where I could find the article about dad winning the dog. In responding, my mom pronounced the dog's name, saying something like, "Oh, we will have to find that article; winning GARY was such a great thing for your dad." Then... having said that, my mother looked immediately startled, realizing she had, at last, provided me with some genuine insight into the origin of my first name.
I still remember the look my mother gave me, as she heard the dog's name pop out of her mouth. My mother immediately tried to try to distract me, hoping, I am sure, that I didn't pick up on what she had said. I didn't say anything, myself, since I, too, was startled. I had never had a clue that "Geri" could be pronounced, "Gary," and I never confronted my parents about the origins of my name ever again. I just knew, after that inadvertent disclosure, that I was most likely named, "Gary" in honor of that wonderful dog, "Geri," whose name was pronounced just like mine. Or, actually, vice versa!
This all came up, just a couple of months ago, when a person doing research on Larry Trimble's career contacted our family, because she had found some information about Trimble on the family website. My sister, Nancy, translated some of the handwritten letters into more readable text, and Margaret Stevens, the woman doing the research, was very appreciative. Because I never actually had any definitive proof that "Geri" was pronounced "Gary," instead of "Jerry," I sent Ms. Stevens an email, asking her if she had any information on that subject. Was it "Jerry" or "Gary?" Helpfully, Ms. Stevens sent me back a little screenshot of a letter that makes it all clear: 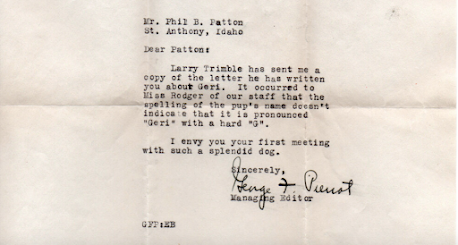 "Geri" was pronounced with a "hard G." "Gary" it is! I now know for sure that I was not named for Gary Cooper. I was named for a pretty wonderful dog. I guess I am just going to have to try to live up to the legacy!