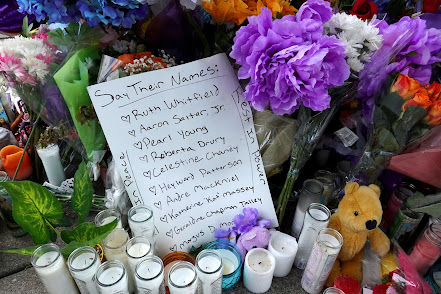 This is not who we are. It is always tempting to frame episodes like the racist massacre in Buffalo as the exception to the rule. It is harder to acknowledge what the overwhelming record makes plain. This is precisely who we are.

Making statements about who somebody "is," and about "who we are," is always problematic. I have written in this blog before about why such statements can never be taken at full face value. My earlier blog posting was called, "All Of The Above," and discussed that wonderful poem about "The Blind Men And The Elephant." What we say about the character of any one person, or about the character of a collective group, is almost always certain to provide us with what is only a "partial list" of what is actually true.
In my earlier blog posting, I also mentioned what I call the "is" fallacy. When we say that something "is," we often act as though we are describing a truth that is "essential," that is both permanent and unchangeable.
In fact, reality does not confront us as a "done deal." Our "is" statements are only valid as a current measurement, not as a statement about some sort of inevitable truth. To Giridharadas' credit, his statement that our nation "is" racist, and that this racism defines "who we are," is qualified by his assertion that this "isn't who we have to be." While this declaration might seem to eliminate any cause for unhappiness with what Giridharadas said, there actually is a difference between "being" and "doing." Who we "are," and what we "do" are actually separate things. I continue to caution against the "is fallacy." Using verbs like "is" and "are," to make statements about individuals or societies, is almost certainly going to lead to confusion, since such statements, on their face, claim to have identified some essential truth or attribute of whoever or whatever is being described.
I prefer to position myself, always, as an apostle of "possibility." In the world we have created (as differentiated from the World of Nature, which we did not create, and into which we have been rather mysteriously born), all things are possible. This includes both horrible things, like the Buffalo killings, and good things, like heroic individual actions, and the collective response of our society to human need.
Let us not forget, either, the "time dimension" that is inherent in all statements about what "is," or about "who we are." Those "is" and "are" verbs seem to refer to the present, but they actually describe the past. Even if an "is" statement is absolutely accurate when spoken, we must remember that the past does not determine the future, and thus who we "are," today, may be quite different from who we will be tomorrow, since that future will depend on what we do today - right now.
Freedom - we should never forget it - lives in the present. Believing that we have, right now, the possibility (both individually and collectively) to defy what we often, and erroneously, assume to be an unchangeable "reality," may be something not dissimilar from what is called "faith" in the context of religion.
If we want to be different from who Giridharadas says "we are," we need to believe that we do, indeed, have the ability to transform ourselves, and to transform what we have done, and to do something new.
In Matthew 17:20, Jesus is quoted as saying, “If you have faith as a small as a mustard seed ... nothing will be impossible for you."
Nothing is impossible in the human world in which we most immediately live. I think that's right! But we need to believe that who we "are" is not really a statement about limitations, or inevitabilities, or about our essential nature. We need to know that what counts in the end is not who we "are," but what we do.
To Subscribe Just Click This Link
Image Credit:
https://the.ink/p/this-is-who-we-are-it-isnt-who-we?s=r