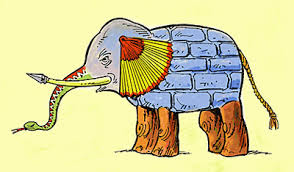 Politics is never about truth. It is about opinion. We may be right to believe that Islamic fundamentalism is wrong (as are many if not most fundamentalisms); but that belief is an opinion not a truth. It is an opinion that has emerged over time through persuasion. If that opinion is to be maintained, it must be persuasive. We must argue for it and convince the majority that it is correct. That is why it is essential that we allow those who disagree to make their arguments. We should listen to fundamentalists and argue with them, not dismiss them, caricature them, or punish them. That is the best way we can truly confront, disagree with, and defeat our enemies. The same is true for those who are racist, sexist, or anti-Semitic.

The statement above is from Roger Berkowitz, commenting on Hannah Arendt's view of politics. The illustration is a pictorial depiction of one of my favorite poems, The Blind Men And The Elephant, by American poet John Godfrey Saxe.

It is not ours to know "the truth," in the sense that we can ever "prove it." At least, not in our human world. In the World of Nature, where the laws are called "laws" because they perfectly describe what actually happens, the concept of a provable "truth" has some pertinence.

But not in our human world. We live in a world of "opinion," not "truth;" that is, we live in a "political" world. In that political world, the laws are not descriptive but prescriptive. They tell us not what will or must do, but what we want to do. In the human world that we create, "laws" are not discovered; they are made, and in any democratic society, persuasion is an absolute prerequisite. That's what Berkowitz says. That's what Arendt says.