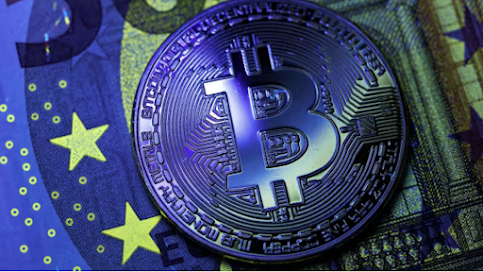 My blog posting yesterday was an effort to discourage any of my friends and followers from "investing" in cryptocurrency. I have family members who seem sorely tempted. I am not so tempted, myself, and that is largely true because when I was quite young my father provided me with a personal copy of Extraordinary Popular Delusions And The Madness Of Crowds. I am, more or less, trying to "pay it forward" by my cautionary words about cryptocurrency.
Incidentally, I wrote the blog posting that was published yesterday before the recent "crash" of the cryptocurrency market. I count the recent news as a pretty good confirmation of the point I was trying to make.
Since I have been "speaking about money," though, it may be that another warning is also in order. Central Bank Digital Currencies are not quite the same thing as the kind of cryptocurrencies I was talking about in yesterday's blog post. Still, there are some real dangers involved with Central Bank Digital Currencies, and if you haven't been paying attention, take a few minutes to get up to speed.
I suggest that you get up to speed by clicking this link, to learn what Charles Eisenstein has to say about Central Bank Digital Currencies. Eisenstein's commentary is not exactly short, but I think it is worthwhile. If you don't already know about proposals to move our "money" system to a system based on Central Bank Digital Currencies, you should find out about what is involved.
Here is a very quick condensation of Eisenstein's longer explanation:

A central bank digital currency essentially allows private individuals and businesses to have accounts at the central bank. It would function just like (and ultimately replace) cash, requiring no intermediary, no bank, no credit card company, and no transaction fee. If I buy a coffee at your cafe, an app or card reader sends a message to automatically credit your account and debit mine. The user experience would be the same as today, but there would be no fee and no lag time. Normally, paying by debit or credit card involves a 3% fee and a day or two for the funds to become available to the seller.

Now I’ll list some other benefits and advantages of CBDCs. You might notice that with a mere twist of the lens, many of these advantages take on an ominous hue. But let’s start with the positive:

As mentioned, CBDCs can remove what is essentially a 3% tax on most consumer-level transactions, allowing swift, frictionless transactions and transfers of money.

Unlike with physical cash, all CBDC transactions would have an electronic record, offering law enforcement a powerful weapon against money laundering, tax evasion, funding of terrorism, and other criminal activity.

The funds of criminals and terrorists could be instantly frozen, rendering them incapable of doing anything requiring money such as buying an airplane ticket, filling up at a gas station, paying their phone or utility bills, or hiring an attorney.

CBDCs are programmable, allowing authorities to limit purchases, payments, and income in whatever ways are socially beneficial. For example, all products could have a carbon score, and consumers could be limited in how much they are allowed to buy. Or, if rationing becomes necessary, authorities could impose a weekly limit on food purchases, gas purchases, and so on.

With programmable currency, citizens could be rewarded for good behavior: for eating right and exercising, for doing good deeds that are reported by others, for staying away from drugs, for staying indoors during a pandemic, and for taking the medications that health authorities recommend. Or they could be penalized for bad behavior.

Taxation and wealth redistribution could be automated. Universal basic income, welfare payments, stimulus payments, or racial reparations could be implemented algorithmically as long as CBDC accounts were firmly connected with individual’s identities, medical records, racial status, criminal histories, and so forth.

Basically, beyond facilitating transactions, CBDCs offer an unprecedented opportunity for social engineering. Assuming that those in control are beneficent and wise, this is surely a good thing. But if, as many of us now believe, our authorities are foolish, incompetent, corrupt, or are merely fallible human beings incapable of handling too much power, then CBDCs can easily become instruments of totalitarian oppression. They allow authorities:

To freeze the funds not only of terrorists and evil-doers, but dissidents, thought criminals, and scapegoated classes of people.

To program money so it can only go to approved vendors, corporations, information platforms, and so forth. Those that fail to toe the party line can be “demonetized,” with consequences far beyond what befalls the hapless YouTuber who utters heresies about Covid, Ukraine, climate change, etc.

Under the guise of rewarding good behavior and penalizing bad, to control every aspect of life so that it conforms to the interests of elite corporate and political institutions.

To nip in the bud any opposition political movement by demonetizing its leaders and activists, either with no explanation at all, or under flimsy pretexts that their victims would have no way to contest.

It boggles my mind that the public could accept such a momentous transfer of power to central authorities, with nary a whisper of democratic process. Something this significant should require explicit public approval in the form of a referendum, constitutional amendment, or the like, after long and considered public debate. Instead, elites discuss it as if it were an inevitability (emphasis added).

Frequent readers of this blog know that I reject the whole idea of "inevitability." That said, it is also true that "self-government" is only made real when we get involved in government ourselves.
So, be advised - and read the entire Eisenstein piece for more on Central Bank Digital Currencies!
Image Credits:
https://www.ft.com/content/de161efa-3a27-4bfd-8dec-cbd9ac07a2ef
To Subscribe Just Click This Link