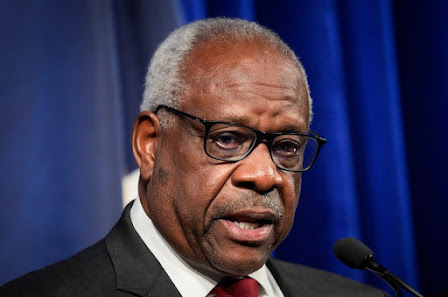 Supreme Court Justice Clarence Thomas (pictured above) has started to "freak" about the recent "leak" of a draft opinion that indicates that the Court is prepared to repudiate its fifty-year old precedent in Roe v. Wade.
The fact that Thomas is "freaking out" about the leak was revealed in a recent article in The Washington Post. Here is how Thomas was quoted in the article:

The leak of a draft opinion regarding abortion has turned the Supreme Court into a place “where you look over your shoulder,” Justice Clarence Thomas said Friday night, and it may have irreparably sundered trust at the institution.

“What happened at the court was tremendously bad,” Thomas said in a conversation with a former law clerk at a conference of conservative and libertarian thinkers in Dallas. “I wonder how long we’re going to have these institutions at the rate we’re undermining them. And then I wonder when they’re gone or destabilized, what we’re going to have as a country (emphasis added).”

When we "destabilize" the Supreme Court we do, indeed, move into uncharted territory, and one does wonder, if the Court loses credibility and the people's faith in its trustworthiness, "what we're going to have as a country."
Don't you think, though, Clarence, that what is really undermining trust in the Supreme Court is not "the leak" of a draft decision, but rather the actual contents of that draft decision? Isn't it true that what was leaked is a lot more of a problem than the "leak" itself? Don't you think that the issue isn't trust at the Court, but trust in the Court?
I know that you're "freaking out" because of your personal loss of privacy as a Supreme Court Justice, which you counted on as something never to be questioned.
But how about the millions of women in the United States of America who counted on their right to privacy, and on their right to make their own decisions about their reproductive freedom? The privacy expectations of  the women, whose expectations were based on a fifty-year-old precedent that you are, apparently, willing to disregard in its entirety, have now been smashed to smithereens. And why? Well, based on the "leaked" decision, because you and four other Justices have abruptly decided that women never should have been told they have such privacy rights in the first place.
I am genuinely sorry for your loss of privacy, Justice, and it is too bad that the "leak" of the Court's draft opinion reversing Roe v. Wade has inconvenienced you. If I were you, however, and cared about the future of the country, as you claim you do, I'd be freaking out not about that violation of privacy, but about the consequences of your own apparent willingness to deny privacy rights to women - rights, incidentally, that I think are very much recognized in the "original" version of the United States Constitution.
Tough it out, Justice; that's my advice. Whatever inconveniences and losses you may be experiencing are but pale shadows of the losses that you, yourself are apparently prepared to cause by your own, arrogant behavior.
To Subscribe Just Click This Link
Image Credit:
https://www.washingtonpost.com/politics/2022/05/14/clarence-thomas-supreme-court-leak-roe-trust/