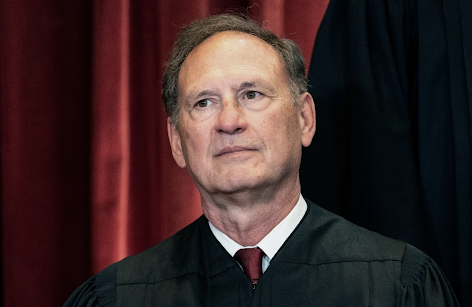 Supreme Court Justice Samuel Alito, pictured above, has authored a draft opinion overturning the Supreme Court's 1973 decision in Roe v. Wade. Apparently, at least four other Justices of the Supreme Court are prepared to support Alito, and to overturn the longstanding precedent that assures women that neither the federal government nor a state government could ever deny them the right to obtain an abortion during the first trimester of a pregnancy.
If Roe v. Wade is, in fact, overruled, as it looks like it will be, the Supreme Court would be saying that there is nothing in the United States Constitution that would prevent a state from prohibiting abortions, or from making it a crime either to have an abortion, or to perform an abortion, or to assist someone in obtaining an abortion. Such a decision would be a total reversal of the 1973 decision - which said exactly the opposite. Such a decision would similarly repudiate the Court's 1992 ruling in Planned Parenthood v. Casey.
Alito's draft opinion was "leaked" (something that is almost completely unprecedented), and while the draft opinion has no legal standing whatsoever, at this point, and nothing has actually "happened yet," general consternation has prevailed. The Chief Justice has confirmed that the draft opinion is authentic, which means that unless some justices change their mind, it is likely that Roe v. Wade will be flat-out repudiated by the Court.
I was interested in the reaction of New York Times' columnist Bret Stephens. Stephens is a political "conservative," whom I enjoy reading, even though his views are often contrary to my own. Stephens' ongoing dialogue with "liberal" columnist Gail Collins - published weekly in The Times - models how people with different political views can talk to each other in a non-confrontational way. That is a lesson that could be of benefit to many of us.
Given that I know that Stephens can appreciate the views of someone with whom he largely disagrees, I was not completely surprised to learn that Stephens did not much support what Alito is attempting to do. In his column on May 4, 2022, Stephens says that "Overturning Roe Is Not Conservative." Here is how Stephens begins his column, addressed as if it were a memo to the Chief Justice of the Supreme Court, John Roberts, along with Justices Barrett, Gorsuch, Kavanaugh and Thomas:

It stood on the legal principle of a right to privacy found, at the time, mainly in the penumbras of the Constitution. It arrogated to the least democratic branch of government the power to settle a question that would have been better decided by Congress or state legislatures. It set off a culture war that polarized the country, radicalized its edges and made compromise more difficult. It helped turn confirmation hearings for the Supreme Court into the unholy death matches they are now. It diminished the standing of the court by turning it into an ever-more political branch of government.

But a half-century is a long time. America is a different place, with most of its population born after Roe was decided. And a decision to overturn Roe — which the court seems poised to do, according to the leak of a draft of a majority opinion from Justice Samuel Alito — would do more to replicate Roe’s damage than to reverse it.

It would be a radical, not conservative, choice.

What is conservative? It is, above all, the conviction that abrupt and profound changes to established laws and common expectations are utterly destructive to respect for the law and the institutions established to uphold it — especially when those changes are instigated from above, with neither democratic consent nor broad consensus (emphasis added).

What I immediately thought about, upon reading that bolded language, was my own observation about the "two kinds of law" with which we are familiar. Per my "Two Worlds Hypothesis," I frequently note that the "laws" that govern the Natural World are completely different from the "laws" that govern in the world of human affairs. Natural laws state what must and will happen; they state certainties, upon which we can, and do, rely. The "Law of Gravity" is my go-to example. It doesn't much matter whether you like that law or not, the Law of Gravity is descriptive, and tells us what must and will occur.
Our own laws, unlike the laws that govern the World of Nature, are not "descriptive," but "prescriptive." They tell us what we want to happen, what we think we should do. They do not provide us with statements about "inevitabilities." Human laws can be changed - and frequently are. The "law" established by the Roe v. Wade decision in 1973 is just such a law. Prior to that 1973 decision, there was no constitutional protection for a woman's right to choose whether or not to have an abortion, and there is nothing "inevitable" that says there should continue to be such a right. We "live in a political world," and the "formula" that I mention from time to time is the formula that governs what happens within that "political world."
Politics > Law > Government
But is Stephens right when he says that "abrupt and profound changes to established laws ... are utterly destructive to respect for the law...?"
If so (and there is a good argument that Stephens is correct), I think that is because most people tell themselves that "our" laws - our human laws - are "like" the laws that apply in the World of Nature. If that were true, life would be more certain, and we wouldn't have to bother ourselves about "politics," that dirty and dangerous business that requires us to be personally involved in making the rules that govern the world we inhabit. Once a "law" has been established in our "political world," we would like it to be just as reliable as the Law of Gravity, so we can turn our attention to other things. Abrupt changes in the laws make it appear that it is "power," not democratic choice, that determines what happens in our world.
And, of course, without our ongoing and continuing political involvement, that is exactly what does happen: power prevails when the people, themselves, are not personally involved in their government.
Because the "laws" that determine how our human world is operated are "laws" that we promulgate ourselves, and because those laws will be dictated by the most powerful, absent widespread democratic engagement and participation, the draft opinion from Alito is sending a revolutionary message to the public. If we believe that a woman should have the right to choose whether or not to have an abortion, we will need to take the political actions required to make that right real, and to conform the laws to what the majority of the public want.
Relying on an insulated Supreme Court, which is apparently ready to repudiate its own precedents, is to confuse our human laws with the inevitabilities of the laws that work in the World of Nature.
This world, and the laws that govern it, is our world to operate, and it operates, ultimately, on the basis of political decisions that give us the law that govern our human affairs.
In other words, in this matter, as in every critical issue that confronts us, from climate change, to racial justice, to income and wealth inequalities, to our continuing commitment to the military means to destroy everything that has ever been built by human effort in a fireball flash of nuclear conflagration, it is time for "we, the people," to start rowing our own boat!
We need to "pick up an oar," if we want to steer to a destination that we will find acceptable, and we need to pull for the upstream.
Downstream, gently as we drift, leads us to destruction.
Image Credit:
https://www.politico.com/news/magazine/2022/05/03/alito-wants-brawl-draft-opinion-00029582
To Subscribe Just Click This Link