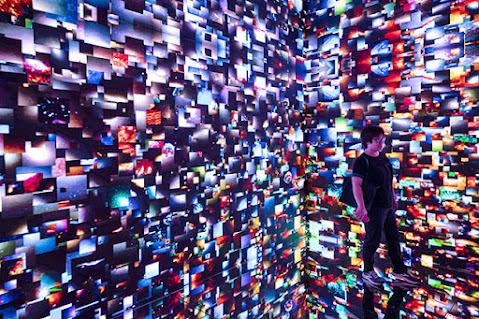 In the portrayal above, it is somewhat difficult immediately to pick out the person on the right, amidst the multicolored images in which he walks. The picture has been captured from an article in City Journal, a publication of the Manhattan Institute, and the way I read the message, the young man, symbolizing humanity and its future, is equipped with a backpack and is heading into the "Metaverse" as wilderness.
The article I am referencing is titled, "Enter The Metaverse," and is authored by Bruno Maçães, who is  a Portuguese politician, consultant and author. Maçães is also a nonresident senior fellow at the Hudson Institute and a former Secretary of State for European Affairs in Portugal. I commend his article to you, and I will give you some sample excerpts. Maçães says, among other things:

The great migration to digital during the pandemic showed the enormous advantages of being able to work and live within an artificial, secondary universe. In this universe, the laws of space and time no longer apply, or at least they can be bent, enhancing human powers in ways still to explore....

The immediate appeal of the metaverse is that it promises to marshal the virtues of digital life, while addressing many of its shortcomings. Instead of business meetings on Zoom, imagine entering a digital room and talking to our colleagues around a virtual table, or even walking together in an electronically conjured garden. I imagine the metaverse as a virtual world with some of the characteristics of a city. There will be virtual malls, where users can move from store to store and buy the products that will later be delivered to their physical homes—a big improvement in digital shopping over the flat webpage. There will be virtual beaches where we can meet our friends to chat and play, much like what Fortnite already offers today, only much better. There will be concerts and art galleries. Is there a reason to travel physically to Venice to visit the Biennale instead of jumping into the metaverse and enjoying all the art and video installations with the latest fully immersive technology? Traveling to exotic locations could happen while we sit in our own living room....

According to the Chinese think tank, American authorities may hope to use the metaverse revolution to push U.S. companies to a new and unassailable position of global dominance, while taking advantage of the new technology to promote American culture and American values globally. That Meta has taken the lead is seen as particularly ominous.

It is easy to see why many might regard the concept of the metaverse as excessively influenced by Western ideas. The metaverse is, before everything else, a method of escapism. Each individual gains the freedom to pursue his or her own most personal fantasies in the metaverse. It is as if the common world fragmented into millions or billions of private universes. Science fiction writer Liu Cixin argues that the metaverse is like a drug—one so powerful as to break our connection with the world around us. As he put it, humanity is now at a fork in the road: in one direction lies the exploration of outer space; the other leads inward toward virtual reality, the “dead end of entertainment.” ...

Rather than using the metaverse to invent purely imaginary worlds, it would be possible to use it to create altered versions of the real world. In this sense, the Chinese Internet is already a kind of metaverse, a virtual-reality machine giving us a vision of the world from which certain elements have been excised....

The metaverse represents the most recent battle between human freedom and the constraints of reality. It could also become a battle to define reality itself.

To me, Maçães' article raises issues that are not only political, practical, and commercial, but that are, essentially, theological. Could it be that we might fully occupy a world completely divorced from what I often call the "World That God Made?"
My so-called "Two Worlds Hypothesis" is based on the idea that we, as humans, are born into a world that we did not create. That world, the "Natural World," is the world upon which we are ultimately dependent. That said, my hypothesis holds that we live, simultaneously, and most immediately, in a "Human World" that we have built ourselves. We are concurrently present, in the way I explain our existence, in both the Natural World and the Human World, though we prefer to think of the world as our own creation. This is, in fact, where the "theology" comes in. While it seems obvious to me that what has commonly been called the "Creation" is not our own work, what tends to fascinate us is what we have done ourselves.
In the "Metaverse," we are invited to inhabit a space in which there is no longer any evidence, at all, of a World of Nature upon which we are ultimately and totally dependent. Everything within the "Metaverse" will be a human creation, and while it will remain true that all our human creations, including the "Metaverse," are dependent on a world that we did not create, when we live within the "Metaverse" our awareness of this fact will be attenuated.
In the "Metaverse," as Maçães explains it, "human freedom" (associated with the human world that we create) is set off against the "constraints of reality" (which I take to be a reference to the Natural World, where "real" limits exist, and where those limitations constrain us). In the "Metaverse," all these constraints might simply be shrugged off. Whatever "reality" we wish for can be achieved.
I must say, while I agree with Liu Cixin that the "Metaverse" is apt to act like a drug, stupefying us, I do not believe that the choice now presented is between "the exploration of outer space" and a "virtual reality, the 'dead end of entertainment.'" As far as I am concerned the exploration of outer space, like the creation of the "Metaverse," are both efforts to escape "reality," which cannot, in fact, ever be escaped, because the World of Nature is the ultimate reality upon which all other human-created realities depend.
While we can "explore" outer space, which is certainly part of the World of Nature, we have no reason to believe we can live there. The essentials that humans need to live are found only on Earth - at least as far as we know. We can hypothesize that there are other "garden planets" which might in some way be comparable to our home, but we have never actually discovered one, and the idea of living on Mars, or the Moon, is an idea that would require us to take the materials we find on Earth to some other location, and establish some toehold off the Earth that is still, in fact, utterly dependent on it.
Besides exploring outer space, or creating a new "Metaverse," there is one other alternative.
That alternative, in my opinion, is the only one worth thinking about. It is to live, here where we have been so mysteriously born, and to celebrate, together, this gift beyond duplication: