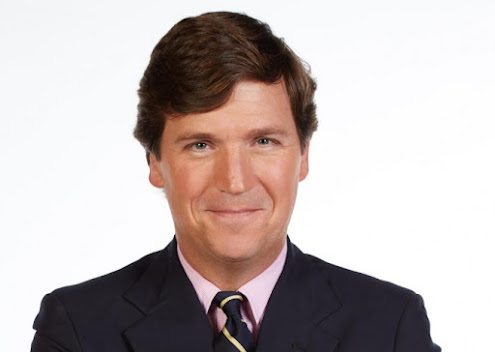 I almost titled this blog posting, "All Tuckered Out." Recently, I have been hearing a lot about the Fox News commentator, Tucker Carlson (pictured above), and "more than enough" is my reaction.
If you want the most recent coverage by The New York Times (and can get past the paywall), feel free to indulge your own Tucker Carlson jones by clicking on the following links. They will take you to a three-part series on Carlson and his popularity (more on that popularity in just a bit).
The Carlson coverage in The New York Times took up approximately 25% of the first section of The Times in its Sunday, May 1, 2022, edition:

More About That Popularity Thing
As promised, here is just a bit more about Tucker Carlson's "popularity" (and he is the most highly-rated political/news commentator on television today).
First, let's talk about Tucker Carlson for President. People might think that this is an outlandish suggestion, but it is hard to escape the implications of what The New York Times has just done for Tucker Carlson (See Part 2 of The Times series, linked above, in which The Times specifically identifies Carlson as the "heir" to that other television personality turned politician and then president, Donald Trump).
Who knows whether or not Carlson even wants to be president? I certainly don't. While I have never watched his program, I do think I have a "feel" for what can work politically. My closest friends will tell you that I told them very early on that I thought Trump would beat Hillary Clinton in 2016, after I saw Trump on television at one of his big rallies. If Tucker Carlson wants to be president, stand back and watch out! While I haven't ever watched his program, I have seen enough YouTube clips to know what Carlson can do. He's got talent! 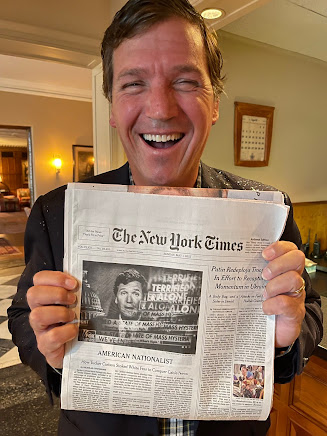 Here is a second comment about Carlson's popularity. I was amazed (and quite disturbed) to learn from a friend, recently, that he is now relying on Tucker Carlson to get the news. Why? Because Carlson "tells the truth," at least the way this friend sees it. My friend is a very progressive friend, with a deep-dyed opposition to American capitalism, and to the idea that the United States of America is "exceptional," and should, basically, be running the world. This is not the kind of person whom I would think would decide to get his information about what's going on from Fox News. I will say, though, that this friend's contempt for our current president did lead him to say, not so long ago, that if 2024 gives us another Biden-Trump contest, he will be voting for Trump.
These are, clearly, the views of one friend only, and a straw in the wind, but when the concept that "Tucker is a Truth-Teller" plays well with people who might call themselves "socialist," something is going on.
The Disinformation Board
Here is one thing that is going on: The recent creation by Homeland Security of a Disinformation Governance Board.  This is something that my politically progressive friend specifically cited as evidence that our current president, and the Democratic Party, have now disclosed themselves for what they truly are, a fascist, totalitarian, and Orwellian government that is carrying out an effort to achieve total world domination by carrying out a proxy war against Russia, with Russia (not Ukraine) being the aggrieved party, and the responsibility for nuclear war being, basically, the fault of the United States, if that eventuates.
If you didn't know about the Disinformation Governance Board, and I didn't, when I first heard about it from my friend, that's because you don't watch Tucker Carlson. He was right on top of the story, while our "mainstream media" was not. So far, The Wall Street Journal has denounced this new effort by our government. Let's wait for the so-called "mainstream media," to see what they think.
Actually, I don't have to wait for the mainstream media to know what I think. I think The Wall Street Journal is right to denounce the so-called "Disinformation Governance Board, just as Glenn Greenwald did, but that is not going to convince me that Tucker Carlson is now the person on whom I should rely for accurate and truthful information about what's happening in the United States, and in the world.
I am definitely "Tuckered Out," but the fact that one of my progressive friends has moved in the opposite direction makes me more than nervous!
To Subscribe Just Click This Link
Image Credits:
(1) - https://www.adweek.com/tvnewser/furrowed-brow-disbelieving-smile-the-tucker-carlson-effect/325911/
(2) - https://www.axios.com/tucker-carlson-vows-wont-read-ny-times-series-him-9b12c798-4efc-448d-a04c-f8aaad1a2b41.html