#99 / Grover Cleveland And A Corporate Push Back 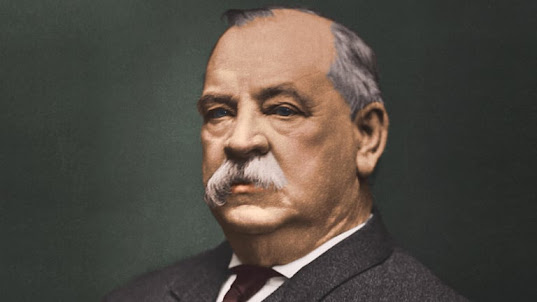 Grover Cleveland, pictured above, was the 22nd and the 24th President of the United States, the only person ever to have served two non-consecutive terms as president. Cleveland is not, I think, generally thought of as any kind of political progressive. However, based on some information from Heather Cox Richardson, a professor of history at Boston College and the author of an influential daily blog, "Letters from an American," we might want to rethink that impression.
If you don't already subscribe to Richardson's blog (there is a free option available), I commend it to you. I consider "Letters from an American" to be an important daily meditation on our national history, written each day as that history is being made.
On March 12, 2022, Richardson said the following (you can click the link for her whole discussion):

In our history, the United States has gone through turning points when we have had to adjust our democratic principles to new circumstances. The alternative is to lose those principles to a small group of people who insist that democracy is outdated and must be replaced by a government run by a few leaders or, now, by a single man....

The Founders’ concept that all men were created equal and had a right to consent to the government under which they lived, the heart of the Declaration of Independence, was revolutionary. For all that it excluded Indigenous Americans, Black colonists, and all women, the very idea that men were not born into a certain place in a hierarchy and could create a government that reflected such an idea upended traditional western beliefs.

From the beginning, though, there were plenty of Americans who doubled down on the idea of human hierarchies in which a few superior men should rule the rest. They argued that the Constitution was designed to protect property alone and that as a few men accumulated wealth, they should run things. Permitting those without property to have a say in their government would mean they could demand that the government provide things that might infringe on the rights of property-owners. These undercurrents have always tossed our republic, but four times in our history, new pressures have brought these two ideas into open conflict. In the 1850s, 1890s, and 1930s and in the present, we have had to fit our democracy to new circumstances ... (emphasis added).

Most of us are painfully aware of the challenges that face our democracy today. And most of us know the basics about the 1850s, and the subsequent Civil War, fought to determine whether a nation "of the people, by the people, and for the people" would survive, or would, instead, "perish from the earth." Most of us also know something about the 1930s, when the Great Depression put democracy to the test, and the federal government, acting on behalf of ordinary men and women, put in place reforms that began a fifty-year period in which national prosperity was, at least to some significant extent, shared generally.
Less well-known, I think, is the period of the 1890s, and the challenges to democracy during those years. Here is what Richardson has to say about those years (and about Grover Cleveland):

In the 1890s, the rise of industrialism led to the concentration of wealth at the top of the economy. Steel baron Andrew Carnegie celebrated the “contrast between the palace of the millionaire and the cottage of the laborer,” for although industrialization created “castes,” it created “wonderful material development,” and “while the law may be sometimes hard for the individual, it is best for the race, because it insures the survival of the fittest in every department.” Those at the top were there because of their “special ability,” and anyone seeking a fairer distribution of wealth was a “Socialist or Anarchist…attacking the foundation upon which civilization rests.” Instead, he said, society worked best when a few wealthy men ran the world, for “wealth, passing through the hands of the few, can be made a much more potent force for the elevation of our race than if it had been distributed in small sums to the people themselves.

Once again, people of all political parties came together to reclaim American democracy. Although Democrat Grover Cleveland was the first to complain that “corporations, which should be the carefully restrained creatures of the law and the servants of the people, are fast becoming the people's masters,” it was Republican Theodore Roosevelt who is now popularly associated with the development of a government that regulated the excesses of big business. He complained about that “small class of enormously wealthy and economically powerful men, whose chief object is to hold and increase their power,” and ushered in the Progressive Era with government regulation of business to protect the ability of individuals to participate in American society as equals (emphasis added).

The United States Supreme Court has repeatedly held (most recently in the Citizens United case) that corporations are "persons," and that corporations are thus entitled to all the privileges, immunities, and deference owed to any human individual. Let us not forget Grover Cleveland! And let us especially not forget his statement that "corporations...should be the carefully restrained creatures of the law...."
Corporations are not like individual human persons. They are our own creations - "creatures" - that do not exist independently of our laws, but that must be subject to the law in every respect. For democracy to prevail over the money power, we must ensure that our corporate creatures are in fact made subject to the laws that the public at large establishes. If we cannot find a way to put corporations under our democratic control, then they will be our masters, as Grover Cleveland warned us, and democracy itself will have failed.
Richardson's March 12, 2022, letter ends with these words:

If history is any guide, we are at the point when voters of all parties must push back, to say that we do, in fact, believe in the principles stated in the Declaration of Independence, that all people are created equal, and that our government is legitimate only if we have a say in it.

Pushing back against the corporations that act as though they are our masters is our political task for this time - and with democracy itself at stake.
Image Credit:
https://www.history.com/topics/us-presidents/grover-cleveland
To Subscribe Just Click This Link