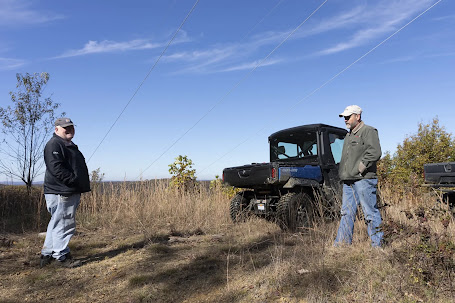 Pictured above are Mike King and Eddy Grey. They are the "Army of Two" mentioned in the headline to today's blog posting. Clicking this link will take you to an article in Governing that explains how these two residents of rural West Virginia have been able to clean up Morris Creek. It is an article worth reading (and it's not too long, either). Cleaning up Morris Creek was not an easy task. As the article explains it:

For decades, toxic runoff from abandoned coal mines has left streams and rivers lifeless in the Mountain State. Then two men decided to reverse the damage taking place in their own backyards.

I like inspiring stories about successful efforts to restore and protect the natural environment. I also like stories that highlight how local and state governments can solve real world problems. I realize that I am biased, of course (and on the second count, particularly), since I played a leading role in local government in Santa Cruz County, California for twenty years, and we had a lot of success in preserving and protecting the environment.
What I really liked about the article in Governing, though - and what led me to today's blog posting - was that headline phrase: "Army of Two."
Two is not a big number. It's like... me and you.
Two is like you... and your best friend, or your neighbor, or a college student who cares.
In other words, we should all realize that if we want to wait around for "the government," or for some philanthropist, or for some nonprofit, or for some other entity to initiate the changes we need.... Well, we may be waiting around for a really long time. Quite probably, nothing will ever be done.
Mike King and Eddy Grey decided to "join the Army." They became an army, and that made all the difference. Even an "Army of Two" can get a lot done, because once you have two, you can get a lot more, and an "Army of Two" can start something that has never been attempted or that has never been done before.
Whatever the issue is that you might put at the top of your list doesn't really matter. Almost all of us have some sort of list of things that need to be done.
We just need to join up!
Image Credit:
https://www.governing.com/now/an-army-of-two-fight-pollution-in-west-virginias-waterways
To Subscribe Just Click This Link