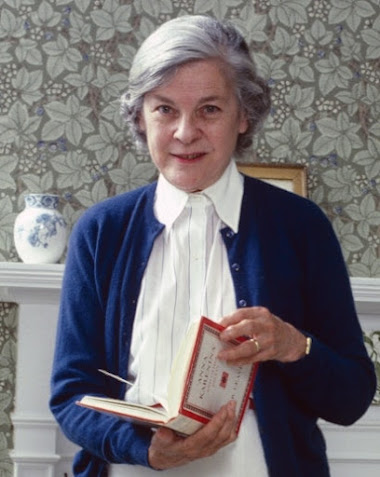 Mary McCarthy, pictured, was a great friend of Hannah Arendt. In fact, McCarthy was Arendt's literary executor. McCarthy also taught at Bard College, in upstate New York, which is where Arendt's husband taught, too. Recently, a former Bard student, Peter Maguire, used his blog, Sour Milk, to recall a class he took with McCarthy. In the blog posting, Maguire told how McCarthy had "cared about my education," and not about his "ego."  Included in Maguire's blog posting was an excellent essay by McCarthy, "Useless Freedom." Just click here for Maguire's blog, and scroll to the end for McCarthy's essay, which is well worth reading.
The issue that McCarthy addressed in her essay was the justification (or not) of limitations on speech - and particularly speech which is disagreeable in various ways, and/or that injures people's feelings. McCarthy was a free speech absolutist. Not only is it impermissible, in her view, to try to censor or limit speech that may be "untrue," or that contains "microaggressions," it really wouldn't do, in her view, even to sanction that proverbial "shouting 'fire' in a crowded theater" example of the kind of speech that might, correctly, be forbidden.
I was reminded of McCarthy's essay, which I had read a few days earlier, when I saw another relatively recent blog posting - this one from someone more famous than Maguire. On March 15, 2022, Glen Greenwald wrote about a claim that former Congress Member Tulsi Gabbard was a "traitor." Greenwald, as you may remember, was instrumental in releasing materials that Edward Snowden stole from the CIA - materials showing that the United States government was spying on each and every person in the United States. Both Greenwald and Snowden have been called "traitors" by some. As Greenwald notes, the word is getting thrown around quite a lot, recently, by political partisans of all stripes. The intention, in using the "traitor" designation, is to shut down speech that the person making the "traitor" charge either disagrees with or finds inconvenient.
I am with McCarthy on the First Amendment free speech question, and I concur with Greenwald that we need to stop using that "traitor" designation as a way to discourage or shut down speech with which we disagree. Greenwald has a very nice constitutional analysis of his own, provided below, noting specifically what the Constitution says about "treason."

The crime of "treason” is one of the gravest an American citizen can commit, if not the gravest. It is one of the few crimes other than murder for which execution is still a permissible punishment under both U.S. federal law and the laws of several states. The framers of the U.S. Constitution were so concerned about the temptation to abuse this term — by depicting political dissent as a criminalized betrayal of one's country — that they chose to define and limit how this crime could be applied by inserting this limiting paragraph into the Constitution itself; reflecting the gravity and temptation to abuse accusations of "treason,” it is the only crime they chose to define in the U.S. Constitution. Article III, Section 3 of the Constitution states:

Treason against the United States, shall consist only in levying War against them, or in adhering to their Enemies, giving them Aid and Comfort. No Person shall be convicted of Treason unless on the testimony of two Witnesses to the same overt Act, or on Confession in open Court.

Treason was the only crime to be explicitly defined and limited by the Founders because they sought “to guard against the historic use of treason prosecutions by repressive governments to silence otherwise legitimate political opposition.” In other words, the grave danger anticipated by the Founders was that "treason” would radically expand to include any criticisms of or opposition to official U.S. Government policy, activities they sought in the Bill of Rights to enshrine as an inviolable right of U.S. citizenship, not turn it into a capital crime.

My thought is that we need to continue to be committed to free speech (Mary McCarthy is right), and that we shouldn't call people "traitors" just because we disagree with them (Glen Greenwald is right).
Image Credit:
https://petermaguire.substack.com/p/mary-mccarthy-and-macroaggressions?s=r
To Subscribe Just Click This Link