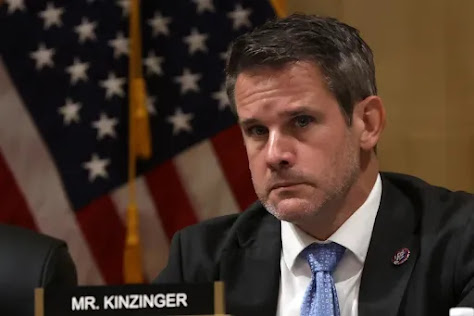 Pictured is Representative Adam Kinzinger, a Republican Member of Congress who represents the 16th District of Illinois. On March 11, 2022, in a series of Tweets, Kinzinger, who is not seeking reelection, apologized for not voting to impeach President Donald Trump, after Trump withheld $400 million in military aid that Congress had allocated for the defense of Ukraine. Kinzinger said his failure to vote to impeach the president was a "mistake," and is now his "biggest regret."
As you may remember, in 2019, Trump called the President of Ukraine, Volodymyr Zelenskyy, letting him know about the Congressional appropriation, but telling Zelenskyy that before the president actually sent the money the president wanted "a favor," namely some political dirt that might damage the then-president's reelection opponent, our current president, Joe Biden. When this fact became known, the House of Representatives voted to impeach the president, for his abuse of his office. Not one, single Republican voted for the impeachment. Russia's invasion of Ukraine, in 2022, is what made Kinzinger say he should have voted for impeachment, and he made this confession after Zelenskyy appealed to Congress to send more military help.
In a comment on Kinzinger's statement, Leonard Pitts Jr., a national opinion columnist for the Miami Herald, said this:

Two presidents were impeached before Trump: Andrew Johnson, who violated the Tenure of Office Act, barring him from firing a Cabinet member, and Bill Clinton, who lied about a consensual liaison with an intern. Those crimes are laughably negligible by comparison with Trump using the power of his office for his own gain. And if the seriousness of Trump’s transgression is obvious now, well, it was no less obvious in 2019. The only conceivable reason for Kinzinger’s inability to see it then, as he himself says, is that he forgot country supersedes party (emphasis added).

I have a comment on that last line, and would like to make a point about how we know what our "country" is. Candidly, while it is correct that most people think that an elected representative should always choose "country" over "party," most people tend to think, at least most of the time, that the "country" is accurately defined by the President and the Congress, and that our elected officials can legitimately speak for, and act for, the "country." This is not to excuse Kinzinger, or the other Republicans in the House, but to say that the kind of mistake that Kinzinger made (and that all other Republican members of the House of Representatives made) is "explainable," if not "forgivable." It was, actually, plausible that the President did represent the "country," and so it was plausible that Republicans in Congress, in both the House and the Senate, could denounce the impeachment as "partisan."
Putting "party" above "country" is exactly what the Republicans said that the impeachment was all about. Lots of people, all over the country, bought into this explanation, and they did so because there is some truth to it. It's plausible. We do elect our representatives to "represent" us, and the president above all, so it is easy to confuse what our duly appointed representatives say and do with the actions of "the country." That's a mistake, but it is an easy mistake to make - and both political parties trade on that.
How do we avoid this mistake, going forward? In my view, we need to reengage with the idea that it is the "citizens," not their elected representatives, who actually represent and who "are" the country.
If we could truly internalize that understanding, that would mean that we, as citizens, would be constantly aware that all of our elected representatives (from both major political parties) are always "suspect," and that our representatives are likely to claim prerogatives that they don't legitimately have. Specifically, those representatives claim to be "the country," and they aren't.
As I consider our current political scene, it seems to me that most citizens do have this (required) suspicious view of all elected officials of both parties. But the "polarity" of our suspicion, from the president on down, may be rather counterproductive. We suspect, and often dislike, our elected officials (of both parties) because we think they have illegitimately usurped our voice and claimed our "country" for themselves. And the people are right about this - both parties do it. To the degree that the claim is made by our representatives, implicitly or explicitly, that they really "are" the country, then those "representatives" (organized by party, clearly) assume the powers that belong to us, the citizens!
But we do not need to treat this fact about our representatives, of both major parties - as some fact that is unchangeable. We, as citizens, need to realize that it is "we, the people," who "are" the country, and that we have every right to oppose, discount, and dismiss and replace those who have been elected, and who now are claiming greater deference than they deserve. This applies, again, to representatives of both (and all) parties.
But that is not what's happening. Most citizens feel more powerless than powerful, and that is the "polarity" that must be changed.
To feel powerful, the citizens must actually be powerful, and that means that we aren't going to come into the right relationship with our government until many more of us are directly engaged in active political action, and are successfully making those representatives truly represent us.
As I like to put it, "we can't have democratic self-government in the United States of America until we get engaged in government ourselves."
We can do that. Really, we can. And when we do that, we will change the world!
Image Credit:
https://slate.com/news-and-politics/2022/03/kinzinger-biggest-regret-trump-impeachment.html
To Subscribe Just Click This Link