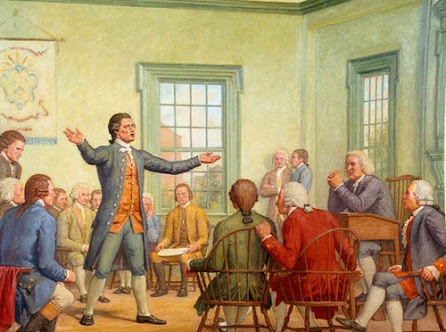 According to a review of Gal Beckerman's book, The Quiet Before: On The Unexpected Origins Of Radical Ideas, what radical ideas need to flourish is "sustained, patient debate among committed people with a shared well-defined ideology."
A review of Beckerman's book, by Barton Swaim, appeared in the Saturday/Sunday, February 5-6, 2022, edition of The Wall Street Journal. According to the review, Beckerman is arguing that radical ideas, in the past, "percolated for a long time in pubs and coffeehouses, pamphlets and small-circulation dissident newspapers, before they burst into public life in the fullness of time." That's not happening today. Beckerman suggests that social media and other internet-based tools are a way to try to shortcut the process, and the shortcuts don't work.
This thesis, that sustained, repeated personal meetings are needed to make any significant or revolutionary change to politics, society, or the economy, is exactly what Zeynep Tufekci says in a YouTube video that I think I have mentioned in one or more of my previous blog postings. Tufekci says, for instance, that the Bus Boycott in Montgomery, Alabama that brought the Civil Rights Movement to life would never have been successful without patient and sustained contact between real people, in real life. I think Tufekci is convincing. Watch the video below, if you haven't seen it already, and I bet you'll agree:
I studied American History when I was in college, and my focus was on the history of the American Revolution. I read Hannah Arendt's book, On Revolution, and became convinced that what happened during our revolution was something that should be considered of "world historical" import - something truly unique, a "lost treasure." I have been a revolutionary thinker since my college days, and I wrote my Honors Thesis for my Social Thought and Institutions Seminar on "The Future of Change in America."
"Now more than ever" is a phrase that is increasingly found in our popular discourse. I actually prefer Bob Dylan's rendition of this much-used phrase, since Dylan's rendition both makes the choice quite clear (it's one thing or the other), while indicating, at the same time, that our human situation has always been thus:
It's Now Or Never, More Than Ever!
Dylan's phrasing does, indeed, perfectly describe our "world historical" situation. A mass extinction is underway, and human civilization is hanging in the balance, with things not looking particularly good. As I am writing this blog posting, I am now reading The Ministry For The Future, a book I mentioned a short time ago. If you like to take your political, social, and economic commentary by way of fiction, let me recommend that book again.
The picture at the top of this blog posting shows a meeting of one of the "Committees of Correspondence" that helped ignite the American Revolution. It is my hope that we, here in the United States, will form small groups of committed people, "talking to strangers," and that we will follow the profound advice that Margaret Mead has popularized, that Hannah Arendt discovered as the "lost treasure" of the American Revolution, that Zeynep Tufekci located in the Montgomery Bus Boycott, and that I wrote about when I was twenty-three years old:
Never doubt that a small group of thoughtful, committed citizens can change the world: indeed, it's the only thing that ever has.
We don't have a lot of time left!
Image Credit:
https://quizlet.com/311123067/apush-the-revolutionary-war-1763-1783-flash-cards/
To Subscribe Just Click This Link