#46 / Extreme Finanacialization Of The Economy 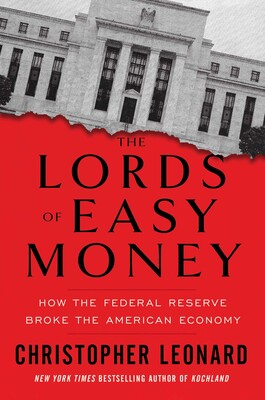 Thanks to a book review in The New York Times, published on January 17, 2022, I am now engaging with, and commenting upon, a book that I have never read; namely, The Lords of Easy Money, by Christopher Leonard.
I have done this kind of thing before. I get so caught up with something I find in the review of a book that I think I can say something intelligent about the book itself, or about the subject that the book addresses, even though I have never read the book. Please forgive me if, after you read my comments today, you think I am in error!
The review upon which I am basing my comments is titled, "Policy in the Guise Of a Page-Turner," by Jennifer Szalai, who is The Times' nonfiction critic. The book Szalai reviewed looks at our banking system and the policies of the federal reserve system, and The Times calls it a "riveting narrative." According to the review, The Lords of Easy Money "filters an argument about the Fed through the experience and worldview of a retired central banker named Thomas Hoenig." For Santa Cruz locals, who might wonder, I am almost 100% certain that despite the similarity of their names, the Thomas Hoenig discussed in the book has no relationship, whatsoever, to Tom Honig, who was once the editor of our local newspaper, the Santa Cruz Sentinel.
Two comments in the review caught my attention. First, Szalai says that the book usefully highlights how extreme financialization has "transformed (or deformed) the economy and our politics." Second, Szalai notes that the book pays no attention at all to modern monetary theory (MMT), which has certainly gained a number of adherents in recent years. Szalai's review mentions Stephanie Kelton as one leading proponent, quoting Kelton for the proposition that "anything we can actually do, we can afford." Kelton's statement, says Szalai, is actually a dictum purloined from John Maynard Keynes.
I have written about Modern Monetary Theory before, once in 2017, and once again in 2019. I basically endorse the theory, which I have described as follows:

Money is not actually a real constraint on governmental spending. In other words, the government does not actually have to "tax," first, to raise the money it needs for governmental expenditures. The government spends first, essentially creating money by spending it, and then it taxes those who have money to control the inflationary effects of making so much money available in the economy.

Of course, as I also noted:

Modern Monetary Theory assumes that we are all in this together, so our collective decisions about what expenditures we should make to achieve our common goals is always the primary question. Resources for governmental expenditures that will benefit the community overall are not what is "left over," using the taxes raised from the "private economy." Our collective economy is the main thing, not the individualistic private economy.

This brings me to the Kelton/Keynes assertion that "anything we can actually do, we can afford." I think there is a problem with this assertion. The problem is that we can't afford to do everything we can "actually do," all at the same time. We need to pay attention to that "opportunity cost" problem that I mentioned back in January. The problem isn't with the money, per se. We can afford to do anything we can actually do - but we can't "actually do" them all simultaneously.
Why is that? That is because our economy isn't, in the end, about money. It's about people. And while you can print money, you can't (not yet, at least) print out people. No matter how much money we have, there is only so much we (collectively) can do, all at the same time. That is why "politics," which is how we decide what we are (collectively) going to do, is always and necessarily about choice.
Individually, as I am fond of saying, "you can't be both a ballerina and a brain surgeon." You're going to have to make up your mind. You might have the ability to do either one of these things - but to be any good at either one of these activities, you will have to dedicate yourself to it, and you won't have anything left over to embark on the other potential choice.
Our society is the same. We can build the biggest military machine in the history of civilization, and we can provide health care for all, and a college education for all who want it, and child care, and housing for every person. But we can't do all these things simultaneously. It's not the money that's the problem. It's the limited capacity of our society to do too many significant things simultaneously. So, we have to choose.
Which brings me to that other comment in Szalai's review of The Lords of Easy Money; namely, that "extreme financialization has transformed (or deformed) the economy and our politics." That sounds right, don't you think? But what does "financialization" mean? It means that "money," not specific tangible accomplishments, have become the focus of our economy. We are no longer interested in making the kind of choices I mentioned in the preceding paragraph. All we seem to care about is making "the economy" bigger, making more money appear, and not for the purpose, as in Modern Monetary Theory, of achieving something we can "actually do," and that we have decided we want to do. No, the "economy" is its own goal - money is the goal, not rebuilding our infrastructure, providing social benefits to those who don't have them, or anything else.
The "Lords" of easy money want to make it easy to make more money.
The rest of us ought to start caring about what really counts - which is what we want to accomplish with our lives, individually and collectively! Of all the things we can "actually do," and there are so many things that we can actually do, what should we do?
That question will lead us to a politics of moral choice.
Continuing to advance the "extreme financialization of the economy" will take us to a different destination.
Image Credit:
https://www.simonandschuster.com/books/The-Lords-of-Easy-Money/Christopher-Leonard/9781982166632
To Subscribe Just Click This Link