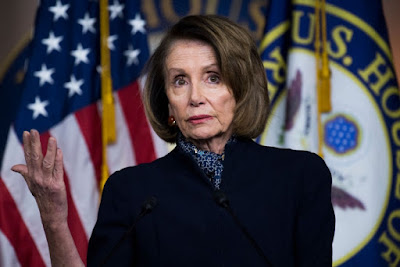 I have written about modern monetary theory before (it is called MMT for short). Maybe I should be embarassed about repeating myself, but points worth making are worth making twice.

This time around, I am recommending an article from In These Times. The article is titled, "PAYGO Is Based on a Fallacy." Pavlina R. Tcherneva, who wrote the article, is an associate professor of economics at Bard College. Tcherneva is arguing that the United States government can dramatically increase spending without raising taxes. That's MMT.

Nancy Pelosi shows up because Pelosi has told Republicans that she will keep the Democrats in line for "Paygo." Paygo is just the opposite of MMT. The Paygo idea is that before you spend money for one thing, you must raise more taxes or you have to defund something else. Generally speaking, Republicans like the Paygo idea (except where military spending is involved). Democrats? Maybe not so much, though as Pelosi demonstrates, Democrats are not necessarily willing to forsake Paygo for MMT.

Here is what Tcherneva has to say on this topic:

Personally, I think it would be good if our elected representatives were to adopt an MMT approach to government spending. If you really want Paygo, however, let's think about balancing the Paygo equation by adding a job guarantee, a Green New Deal, tuition-free college, and Medicare for all and "paying" for all that additional expenditure by reducing our amazingly bloated military budget.

That idea is worth making even more than twice!