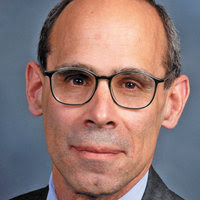 Pictured above is David Bromwich, Sterling Professor of English at Yale University. I was pleased, when I looked him up, to find out that he had been profiled in The Utopian, an online magazine which describes itself as "a critically acclaimed, cutting-edge magazine on philosophy, politics and culture." Past contributors to The Utopian have included Jürgen Habermas, Michael Walzer, Michel Houellebecq and Joseph Nye, among many others. I am kind of a "utopian" myself, taking the position that "anything is possible" in the human world that we collectively create.
Of course, I need to put in the disclaimer. "Possible" does not mean "easy." Furthermore, what is "possible" can be horribly "bad," just as well as amazingly "good." While possibility is my favorite category, I am absolutely clear that it includes nuclear war as well as world peace. It includes both Donald Trump and Bernie Sanders. As the world  learned from the Nazis, we can make our "nightmares" come true, too, not just our "dreams."
At any rate, I looked up Bromwich because I was impressed by his "No Offense" column in the January 10-17, 2022 edition of The Nation. In the hard-copy version of the magazine that I read, Bromwich's column was titled, "The Only Issue." Online, Bromwich's column is titled, "Averting Climate Catastrophe Should Be Issue Number One."
Here are some excerpts from the Bromwich column (emphasis added):

We push away the anxiety, from bewilderment but also from a rational uncertainty regarding tactics. One entire political party denies or minimizes the threat. The other party addresses it somewhere near the top of an indifferent list, alongside worthy items like improved health care and free college.

For the past five centuries, Appropriative Man has sought to dominate nature. The tools discovered by science, which we find already in our hands, are valuable for aggrandizement, destruction, comfort, and self-care. We don’t intend to bury the tools, and even if the sacrifice were plausible, we don’t know how to perform it. We lack the strength to make ourselves weak.

The elimination of convenience and luxury will be part of the end itself. We can “thrive” and be “resilient”—two more favorite words—only in the changed conditions we must now impose on ourselves.

How much easier to talk about the threat of China, the new enemy on the horizon! That is an old-world problem, familiar and sensational. Meanwhile, we may notice occasional floods and tornadoes; we may even pause a day or two over the mass-incineration fires in Australia and California; but we take them in as if they were epiphenomena—freak occurrences, no matter how overwhelming. So we absorb the events that signify a larger degradation, but they pass. And mostly these are tolerable changes. We don’t notice that there are fewer songbirds, fewer insects. And maybe the trees are dying (as sugar maples now are dying in Connecticut), but it happens gradually, and there are other trees around. If spring comes a few days later, what of it? There was no snow last winter, or very little, but how many of us pay much attention, and for how long?

The nature of our lethargy is to look on the catastrophe as one more transient discomfort, amenable to political solutions like the other problems on the usual list. The truth is that this will cost a lot and it won’t be fun. It adds up to an obstruction our commercial culture can do nothing with. This reformation will be full of drudgery and very little uplift. No wonder Barack Obama—who knew enough and knew better—avoided the subject for most of his presidency. No wonder Donald Trump took care to know no better but instead retained “the possession of being well deceived.” The task calls for clear scientific explanation accompanied by political persuasion­—in short, exactly the kind of leadership we haven’t yet seen.

What impressed me about this Bromwich column was its clear statement that we must eliminate "convenience and luxury" if human civilization is to have any chance of surviving the climate catastrophe in which we are all caught up, a catastrophe which presents itself, with a treacherous falsity, as a kind of "transient discomfort, amenable to political solutions."
At the heart of the Bromwich column is a recognition that the climate catastrophe isn't like that! It is not one problem on the list. It's not "one issue." It's the "only issue." That is the right title for the Bromwich column.
Because that's true, the kind of response that Bromwich suggests in his last line isn't going to cut it, and I bet Bromwich would actually agree with me, if we could get together and talk about it (both of us being "utopians," and all).
That last line calls for "clear scientific explanation accompanied by political persuasion."
In fact, we already have lots of "clear scientific explanation accompanied by political persuasion." Let's remember Al Gore and his "Climate Reality Project." Think about Bill McKibben and 350.org. Have you watched what Leonardo DiCaprio is doing in Before The Flood, and Don't Look Up?
That list is just a sample. I didn't even think, as I wrote it out, to mention the speeches of Greta Thunberg. There are many, many more organizations doing just what Bromwich suggests. A lack of clear scientific explanation and political persuasion is not the problem!
What we need, in fact, is a "utopian" solution. It will have to be a solution that operates on the "personal" level, too. It will change our politics, of course. It must do that, but it must begin with individual persons, not governmental enactments, and it will have to include a joyous leaving behind of all the "luxury and convenience" we now equate with life itself: automobiles, undoubtedly; Netflix, video gaming and other entertainment; monster homes; you name it. Can we celebrate a world in which we live once again with trees, and home gardens, birds, and the inconveniences of Nature?
Bob Dylan has a few lines in one of my Last Day songs, Precious Angel:

My so-called friends have fallen under a spell
They look me squarely in the eye and they say, “All is well”
Can they imagine the darkness that will fall from on high
When men will beg God to kill them and they won’t be able to die?

Those lines describe the possibility of a "nightmare." It's one possibility. We can see it coming. But can we imagine the other version - the "dreams come true" option? "Imagine" is the key word:

Imagine there's no heaven
It's easy if you try
No hell below us
Above us, only sky
Imagine all the people
Livin' for today

Ah
Imagine there's no countries
It isn't hard to do
Nothing to kill or die for
And no religion, too
Imagine all the people
Livin' life in peace

That possibility is out there. I'm still a utopian, and I am imagining all that!
To Subscribe Just Click This Link
Image Credit:
https://www.the-utopian.org/post/132640067663/an-interview-with-david-bromwich