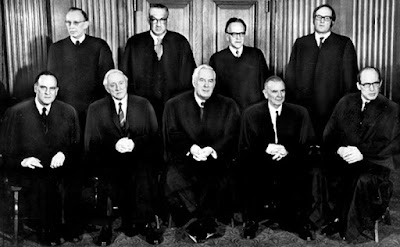 The photo above is a 1972 portrait of the United States Supreme Court. This is the Court that decided Roe v. Wade. In the front row in the photo, beginning on the left, are Associate Justice Potter Stewart, Associate Justice William O. Douglas, Chief Justice Warren Berger, Associate Justice William J. Brennan Jr., and Associate Justice Byron A. White. In the back row, also from the left, are Associate Justice Lewis F. Powell Jr., Associate Justice Thurgood Marshall, Associate Justice Harry A. Blackmun, and Associate Justice William H. Rehnquist.
As you will note, the Court at that time was totally male, and mostly old. The idea that the Supreme Court is comprised of "Nine Old Men" was brought to the attention of the American public shortly after the election of Franklin D. Roosevelt to the presidency. Roosevelt's efforts to promulgate a "New Deal" for the country, which was supported by the Congress, was initially frustrated by the Supreme Court. In 1937, Roosevelt threatened to "pack the Court," by expanding its membership, and while this idea went nowhere at the time (it's coming back around now, in case you have missed this), the Court started to look at the issues in a new light, and the United States had its "New Deal," after all.
As the New York Daily News said on January 23, 1973, in reporting on Roe v. Wade, "The Supreme Court ruled in a historic decision today that it is entirely up to a woman and her doctor to decide whether she will have an abortion during the first six months of pregnancy." Roe v. Wade was then, and still is, a pretty famous case - and certainly a consequential one.
Today, in 2022, anyone who is thinking about Roe v. Wade is probably also thinking about the possibility that the 1973 decision will soon be overturned. On December 1, 2021, arguments were held in the case of Dobbs v. Jackson Women's Health Organization. The Supreme Court is being invited to overturn Roe v. Wade, and news reports, following the oral arguments, seem to indicate that this is a real possibility. That, too, would be a consequential decision - and a decision that we will not be able to blame on "Nine Old Men." The current Court, shown below, is not all old, and it is certainly not all male. About a month ago, prior to the arguments in the Dobbs case, The New York Times printed an editorial with the following headline: "To Protect Abortion Rights, Turn to Elections." Here is what The Times' editorial said:

The most pressing issue in the Dobbs case is not the legal response of the court, but the political response of of a consistent majority of Americans who agree that a woman has a right to control what happens inside her own body in most or all cases.

I think The Times is right. The most important thing is not a "legal" question. The most important thing is a question about our politics. William McGurn, a reliably right wing columnist who writes for The Wall Street Journal, comes at the question from a different direction, but he also makes a case that what we need to focus on, as we decide on the rules that govern our society, is the "legislative" branch, not the "judicial" branch. This is, in fact, what I was getting at some time ago, in my blog posting on Justice Black's dissent in Griswold v. Connecticut, the "privacy" case that preceded Roe v. Wade.
As I so often repeat, there is an "equation" by which we govern ourselves. It begins with "politics."
POLITICS > LAW > GOVERNMENT
"Politics" leads to legislation, to our laws, which then govern every aspect of our lives together. And "politics" begins with us. To be more precise, "politics" begins with us if we wish to maintain a system of democratic self-government. If we do, then we have to be involved in "politics" ourselves.
Image Credits:
(1) - https://www.nydailynews.com/news/national/supreme-court-rules-roe-v-wade-1973-article-1.2068726
(2) - https://www.supremecourt.gov/about/justices.aspx
To Subscribe Just Click This Link