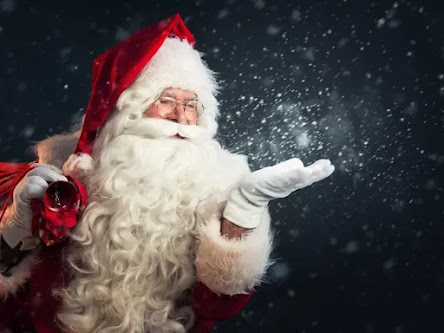 In 1897, Virginia O'Hanlon, then just eight years old, and a resident of New York City, wrote a letter to the Editor of the New York Sun. Virginia lived at 115 West Ninety Fifth Street, and she had a pressing question. Virginia's father had told her that The Sun would provide Virginia with a reliable response to her inquiry, and so Virginia wrote.
Because Virginia wrote, and because The Sun answered her letter, Virginia lives on still.
Here is her letter:

I am 8 years old. Some of my little friends say there is no Santa Claus. Papa says, "If you see it in The Sun, it's so." Please tell me the truth, is there a Santa Claus?

Maybe partly because The Sun took Virginia's inquiry so seriously, The Sun lives on, too. You can click that link for a proof of the Sun's continuing and contemporary existence.
The Sun regularly reprints Virginia's letter, with its earnest inquiry, and of course The Sun includes the response that the Editor made to Virginia's heartfelt question. I am including the full text of what the Editor told Virginia at the bottom of this blog posting. Not to make you wait, let me report the essence of the Editor's reply:

"Yes, Virginia, there is a Santa Claus."

I am not the editor of a daily newspaper published in one of the largest cities in the United States. I am the editor of this rather modest blog, reflecting daily on the World of Nature, the world upon which we all ultimately depend - a world that I have been known to say is the "World That God Made." Of course, as I also note, we live simultaneously and most immediately in a world that we create ourselves, a "human" or "political" world. Frequent readers (and I do encourage subscriptions) will be aware of my views.
So, I thought, as I recently came across Virginia's epistolary exchange with The Sun, would I agree with Francis Pharcellus Church, who answered Virginia's letter on behalf of The Sun, or would I want to deliver her from illusion, and give her the following hard news:
"No, Virginia, there is no Santa Claus."
Well, I think I am going to try to have it both ways!
The Sun's Editor, who was an atheist, identified "Santa Claus" with "love and generosity and devotion." These, he said, most certainly exist - deep in our hearts - even if they are not routinely seen walking about the streets. Do I agree with that? I do! The giver of all the greatest gifts we ever receive or enjoy is not seen among us - at least not usually. Christmas Day, however, is a particularly good day to reflect upon the idea that there is, in fact, a gift-giving Someone (as the Editor said there is, and as I say, too). We know that this gift-giving Someone is not generally visible - except by the evidence of the gifts that this Someone gives. That, as The Sun told Virginia, is the tip-off. The whole celebration of Christmas is a celebration of the fact that the world in which we most immediately live - the world we "see" around us - is ultimately supported and enlivened by a world we don't see, the World That God Made - and by the "Someone" who made that world.
"No, Virginia" (and everyone), there is no "Santa Claus" that is going to make our problems disappear and provide us with all our desires. We are on the hook for that, ourselves, because we live most immediately in a world that we ourselves create, a world we create by what we do, and by the choices we make, and by the actions we take.
But is that human world in which we most immediately live the only one? Those who say it is have been affected, as The Sun's Editor said, by "the skepticism of a skeptical age." There is a gift-giver. Behold His gifts. Behold His World! And celebrate! 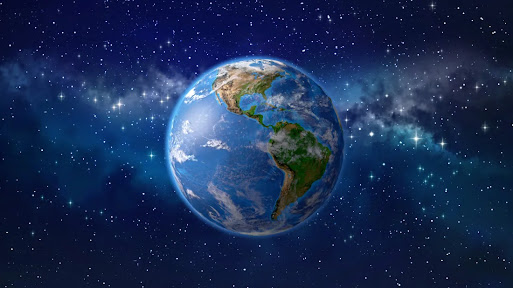 oooOOOooo
The Sun's Response To Virginia's Letter:
Virginia, your little friends are wrong. They have been affected by the skepticism of a skeptical age. They do not believe except they see. They think that nothing can be which is not comprehensible by their little minds. All minds, Virginia, whether they be men's or children's, are little. In this great universe of ours, man is a mere insect, an ant, in his intellect as compared with the boundless world about him, as measured by the intelligence capable of grasping the whole of truth and knowledge.

Yes, Virginia, there is a Santa Claus. He exists as certainly as love and generosity and devotion exist, and you know that they abound and give to your life its highest beauty and joy. Alas! how dreary would be the world if there were no Santa Claus! It would be as dreary as if there were no Virginias. There would be no childlike faith then, no poetry, no romance to make tolerable this existence.

We should have no enjoyment, except in sense and sight. The external light with which childhood fills the world would be extinguished.

Not believe in Santa Claus! You might as well not believe in fairies. You might get your papa to hire men to watch in all the chimneys on Christmas Eve to catch Santa Claus, but even if you did not see Santa Claus coming down, what would that prove? Nobody sees Santa Claus, but that is no sign that there is no Santa Claus. The most real things in the world are those that neither children nor men can see. Did you ever see fairies dancing on the lawn? Of course not, but that's no proof that they are not there. Nobody can conceive or imagine all the wonders there are unseen and unseeable in the world.

You tear apart the baby's rattle and see what makes the noise inside, but there is a veil covering the unseen world which not the strongest man, nor even the united strength of all the strongest men that ever lived could tear apart. Only faith, poetry, love, romance, can push aside that curtain and view and picture the supernal beauty and glory beyond. Is it all real? Ah, Virginia, in all this world there is nothing else real and abiding.

No Santa Claus! Thank God! He lives and lives forever. A thousand years from now, Virginia, nay 10 times 10,000 years from now, he will continue to make glad the heart of childhood.
Image Credits:
(1) - https://economictimes.indiatimes.com/magazines/panache/who-is-to-say-santa-claus-doesnt-exist/articleshow/67267250.cms
(2) - https://www.mentalfloss.com/article/532661/they-saw-earth-space-heres-how-it-changed-them
To Subscribe Just Click This Link