#357 / Should Government Meetings Be Online? 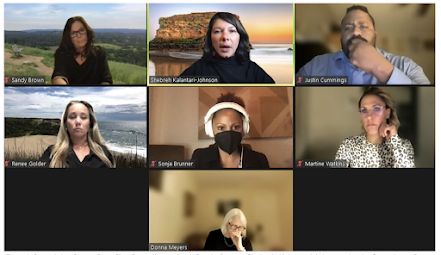 Bill Emmerson, a Republican, is a member of the state's Little Hoover Commission. Pedro Nava, a Democrat, is the Chair. This bipartisan duo wrote a guest commentary that was featured on the editorial page of the Santa Cruz Sentinel on October 1, 2021. Nava and Emmerson's Op-Ed was titled, "Continue government meetings online - permanently."
While I encourage readers to click the link in the first paragraph, and to read the Op-Ed in the original, let me summarize the Nava-Emmerson argument:
The headline of the Nava-Emmerson Op-Ed talks about "government meetings" in general (which certainly includes the meetings of local and regional governmental agencies), but the text of the editorial is focused on state-level boards and commissions. The state has lots of those. According to the State Treasurer's website, to cite one example, the State Treasurer has administrative responsibility for over sixty Boards, Commissions, and Authorities. Click the link to see the list! Almost all of these bodies have members who live all over the state. Other agencies of state government will have a similar list of boards, commissions, and other advisory groups.
Nava and Emmerson are certainly correct to point out that it would save the state money if people didn't have to travel to Sacramento every time there was a meeting of one of these bodies, most of which have a very narrow and specialized jurisdiction. It is also true that the public, generally, will have a lot more access to the meetings of such bodies if the meetings can be seen online, and if members of the public don't have to travel to be able to observe their deliberations. It is also true - third point - that some potential members of such advisory and oversight bodies can't afford the time it takes to travel to remote meetings, so that making online meetings the rule will allow for a more inclusive and diverse membership.
All that said, and with due respect for Nava and Emmerson, online meetings are a terrible idea for local government agencies - and for lots of state agencies, too. The Coastal Commission, for instance would lose a lot if it met online only, instead of traveling throughout the Coastal Zone for its monthly meetings. Most particularly, it would lose contact with the public - and the public would lose contact with the Commission.
Our local government bodies in Santa Cruz County seem to enjoy holding their meetings "online," which avoids the necessity of dealing, directly, with the members of the public whom the elected officials are supposed to represent. The Santa Cruz City Council, for instance, is continuing to hold online-only meetings, and Council Members never have to see the public - not even onscreen. The Board of Supervisors, which is holding "hybrid" meetings, have designed a system that allows Board Members to "attend" the meetings remotely. One member of the Board, whose wife recently got a lucrative job as City Manager of the City of Coronado, is making decisions about Santa Cruz County from San Diego County, at the other end of the state.
The pandemic required online meetings. In-person meeting were prohibited, to protect public health. Compared to no meetings, Zoom and other online platforms are great. However, online meeting are no longer required to protect public health, and they should be terminated immediately. "Watching" a meeting online suggests that we, as members of the public, are mainly supposed to be "observers." Making it easy to observe is different from making it easy to participate - and that's the problem with any plan to put "government meetings online - permanently."
Having been an elected official in Santa Cruz County, for twenty years, I well understand the temptation that local officials have to put real distance between themselves and the people they represent. But setting up systems that allow elected officials to avoid direct contact with the public, during the meetings at which the public's business is done, is a democratic disaster.
The headline on the Nava-Emmerson Op-Ed (continue government meetings online - permanently) is not the right message for any local government agency, and for many state agencies, as well. Our government is not a "spectator sport." Let's not allow our elected officials to try to turn it into one.
Image Credit:
https://santacruzlocal.org/2021/10/13/housing-project-at-831-water-st-blocked-by-santa-cruz-council/
To Subscribe Just Click This Link