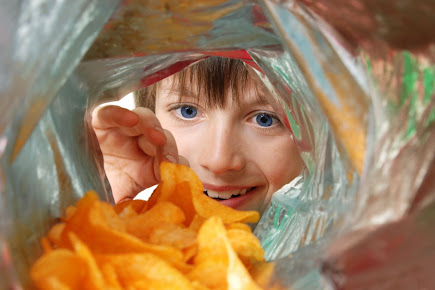 The End of Craving, a book by Mark Schatzker, tells us why we "can't eat just one." It follows up on Schatzker's earlier book, The Dorito Effect.
The End of Craving was recently reviewed in The Wall Street Journal's "Bookshelf" column by Matthew Rees. This is not the same Matthew Rees, by the way, who is a union rugby footballer currently playing for the Cardiff Blues.
I haven't read The End of Craving, but the Rees' review definitely gives us the highlights:

Why has the incidence of obesity—contributing to disease and early death—been creeping dangerously upward in virtually all the world’s countries for the past several decades? More specifically, why does the United States have an adult obesity rate, 42%, that is the highest in the world outside a few small nations?

The simple answer is that people are eating larger quantities of unhealthy food and smaller quantities of the food that’s good for them. But precisely why have dietary patterns changed so much for the worse? In “The End of Craving,” Mark Schatzker, author of “The Dorito Effect” (2015), shrewdly looks into the matter, presenting, among much else, laboratory studies that show how today’s foods and beverages manipulate the brain and wreak havoc on the body.

Start with a staggering fact: 58% of calories in the American adult diet come from ultra-processed foods, 67% among children and adolescents. Such foods—prepared meats, potato chips and other snacks, really almost anything in a package—are high in sugar, salt or fat. Many also contain a witch’s brew of ingredients that make nutrition labels unintelligible: sucralose, methylcelluloses, saccharin, microparticulated protein, Solka-Floc, maltodextrins, carrageenan.

Such ingredients are central to “The End of Craving.” According to Mr. Schatzker, they create “a divergence between the nutritional content the brain senses as it consumes food and the actual nutrients that arrive in the stomach.” The manipulation of nutrients “is what set so many of us on a path to weight gain.”

Mr. Schatzker aptly calls today’s food environment a “calorie casino,” in which the probabilities of nutritional value are uncertain and seemingly subject to chance while also leading people to “behave in self-destructive ways.” Drawing on the work of psychologists such as Daniel Kahneman and his collaborator Amos Tversky, Mr. Schatzker shows that when the brain experiences uncertainty, it tries to compensate by working harder and seeking more of the item that is triggering the uncertainty—an evolutionary impulse reflecting a determination to avoid loss.

Consuming foods and beverages that have been designed to fool the brain into believing that it has received nutrition when it hasn’t, says Mr. Schatzker, stimulates a desire to consume more of them. Cravings follow, and they’re satisfied with the supersize concoctions that have become a defining—and depressing—feature of America’s food landscape. A few years ago, a study confirmed this suspicion: The portion size of entrées at U.S. fast-food outlets, in roughly the past three decades, has grown 24% (emphasis added).

Besides the practical advice provided by Schatzker's book - don't eat food that comes in a package - Schatzker's message highlights a more general issue that I often discuss in this blog. We live, "ultimately," in the World of Nature, but we live most "immediately" in a world that we have created ourselves. Often, we prefer "our world" because our own creations seem to promise that there is way to eliminate the constraints inherent in the natural world. We hope, by creating human substitutes for what we find in nature that we can escape the constraints imposed by the Natural World - a world we did not create and into which we have been most mysteriously born.
"Ultimately," let me emphasize, there is no way to escape our radical dependence on the World of Nature. When we place our bets in the nutrition casino on foods that are "manufactured," and unnatural, we are almost certain to lose (as to health) even as we gain (as to weight).
Many of us, in fact, have figured this out, and we know that our diets - what we eat - don't have to be the result of putting down bets in a "calorie casino." We can actually plan our meals using an online "calories per meal calculator." That's not a bad idea, it seems to me. Just saying!
__________________________________________________
Image Credit:
https://www.wsj.com/articles/the-end-of-craving-review-why-you-cant-eat-just-one-11635977800
To Subscribe Just Click This Link