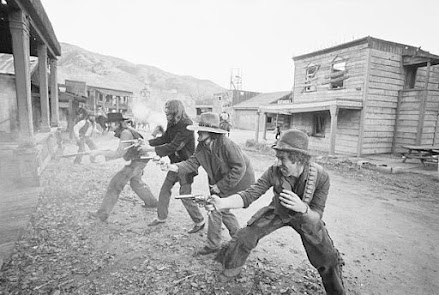 Yesterday, the United States Supreme Court heard arguments in a major Second Amendment case, New York State Rifle & Pistol Association v. Bruen. As per the ordinary practices of the Court, a decision will be forthcoming later, probably in late Spring or early Summer of next year.
An article in the Wednesday, November 3, 2021, edition of The New York Times alerted readers to the fact that the Court was going to hear (among other arguments) "a rare defense of gun control from the right."
Online, The Times' article is headlined, "Prominent Conservatives Back Letting States Limit Guns in Public." Since The Times has a rather formidable paywall, here is an excerpt, to help the readers of this blog posting understand what many will find to be rather surprising news:

A brief filed by a group of prominent conservative lawyers and former government officials in Republican administrations ... argued that “the original understanding of the Second Amendment was that there is not an absolute, unfettered right to carry loaded guns in public.”

J. Michael Luttig, a former federal appeals court judge revered by conservatives, was among the lawyers who filed the brief. He said the issue was straightforward.

“When you look at the history and tradition, spanning six or seven centuries, you indisputably find that public carry of guns has been variously prohibited and regulated throughout the entire time,” he said in an interview. “New York’s statute, and the statutes in other states that are its equivalent, fit very comfortably within the history and tradition of firearm regulation.”

Looking to history is a central feature of originalism, the method of interpreting the Constitution that seeks to determine its original public meaning.

Other lawyers who signed the brief included Peter D. Keisler, a former acting attorney general in the George W. Bush administration; John B. Bellinger III, a top State Department and White House lawyer under Mr. Bush; and Carter Phillips, a leading Supreme Court lawyer who served in the Justice Department during the Reagan administration [and] many historians agreed with Mr. Luttig and his colleagues.

“The weight of the historical evidence is pretty clearly on the side that there’s always been some kind of regulation of carrying arms in public,” said Saul Cornell, a historian at Fordham University who filed a brief supporting New York. “One of the longest continuous traditions in Anglo-American law are limits on the public carry of arms in populous areas.”

The New York law requires that people seeking a license to carry a handgun outside their homes show a “proper cause.” Two men who were denied the licenses they sought sued, along with the New York State Rifle & Pistol Association, saying that “the state makes it virtually impossible for the ordinary law-abiding citizen to obtain a license.”

California, Hawaii, Maryland, Massachusetts, New Jersey and Rhode Island have similar laws, according to briefs filed in the case.

Our old "Wild West," where people went around with guns strapped to their hips, is beloved mainly in its movie depictions and by way of reenactments like the one shown in the photo at the top of this blog posting. Pictured there are members of the Eagles rock band, acting in an old western shootout scene for their album Desperado. In fact, if we examine the actual historical record, letting everyone carry guns around in public, as in those old "Wild West" days of yore, led to a lot of problems - and to a lot of people getting killed who shouldn't have been.
A modern equivalent of those old "Wild West" days, typified by people carrying guns around in public, and using them when they thought their use was justified, is also facing a judgment in the courts, in another case. On the same day that the Supreme Court heard arguments in the Bruen case,  a court in Kenosha, Wisconsin began a trial that was also featured the first section of The Times yesterday.
I am speaking, of course, of the trial of Kyle Rittenhouse, who came from his home in Illinois to Kenosha, Wisconsin, bringing a semiautomatic, military-style rifle with him. The result? Two people dead and another badly wounded (all shot by Rittenhouse). Wisconsin didn't have any ban upon carrying guns in public. The question before the Supreme Court in the Bruen case is going to be whether Wisconsin could ever change its mind about that, and follow the lead of places like California, Maryland, Massachusetts, New Jersey, Hawaii, and Rhode Island.
Of course, the decision in the Bruen case, now before the Supreme Court, might also mean that the existing laws in states like California, where I live, would be branded as unconstitutional, and hence unenforceable. Speaking for myself, I am not at all interested in a future that includes a Halloween celebration on Pacific Avenue, with Kyle Rittenhouse and his gun made welcome to participate.
I am hoping that the Court is going to listen to those "conservative" advocates who make the case that states and localities should be able to decide, for themselves, whether the Kyle Rittenhouses of the world have a constitutional right to venture out in public with their armaments, or whether, in fact, our history makes pretty clear that the right to carry guns in public may be subject to rules and regulations adopted by the majority, and that there is nothing, whatsoever, unconstitutional about that.
I am definitely on the side of those "conservatives" on this one.
By the way, the picture below, featuring Kyle Rittenhouse, is intended to let you know the kind of behavior that we could be seeing a lot more of, depending on what the Supreme Court decides. For those wanting to dig into the details of the Bruen case, let me suggest you click on this link, to read what SCOTUS Blog has to say. Among other things, it says that, "We read all the amicus briefs in New York State Rifle so you don’t have to. 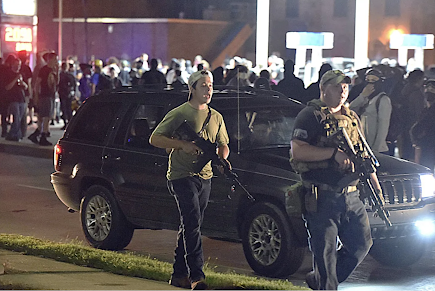